So, Simone and Byrne are off Action Comics as of issue #835. Simone's a good writer, and I wish she'd gotten more time to get used to the title. Her first issue with Dr. Psycho was a blast, though the rest of her run thus far has been rather mediocre (which is several steps up from the crap that preceded it). Thankfully, though, we don't have to endure any more of John Byrne's sub-par art or immense ego or problems with inkers trying to make his work look halfway professional.

But that was another post entirely. The point I'm making today has to do with the apparent content of issue #835, the introduction of supervillain Livewire, who made frequent animated appearances, into the comic book continuity. Livewire's a fantastic villain, a fun character all around, and looks cool to boot. I'm all for the translation of cartoon characters into the comic universe. Sure, Harley Quinn hasn't been up to much lately, but I like having her around. 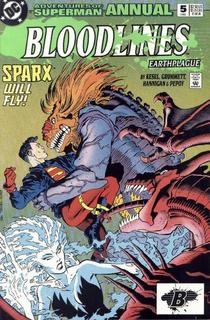 Sparx was a "New Blood" character, introduced in the DC Bloodlines Annuals, and should have been forgotten like most of the New Blood characters. Sure, some of them have turned up here and there (most notably Gunfire, Anima, and Hitman), but most have faded into utter obscurity. Sparx got her second lease on life with the introduction of spin-off series "Superboy and the Ravers," where she led her friend Superboy to an intergalactic rave. Or something...I only have the first issue, and I haven't read it in years, though I'll look into the rest of the series sometime after I complete my collection of the main Superboy book. 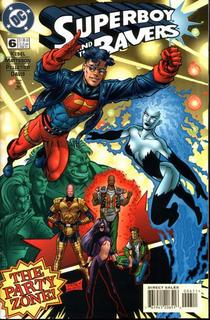 So, Donna Carol "DC" Force (har-de-har-har) was somehow turned into an electrically-powered superhero by the MacGuffin of Bloodlines, which happened to occur while Superboy was occupying "Adventures of Superman." She looked a heck of a lot cooler than most of the New Blood folks, and I imagine that contributed heavily to her appearances in "Ravers." Then, when the folks at Superman: TAS decided to flesh out Superman's rogues gallery a bit, they pulled Ms. Force's design out of the "forgotten character" pile, gave her a new identity (shock jock Leslie Willis), and a new codename, Livewire (at the time, that was also the codename of that LSH's Lightning Lad). I mean, it's possible that the design similarities were coincidental, but they sure are similar. 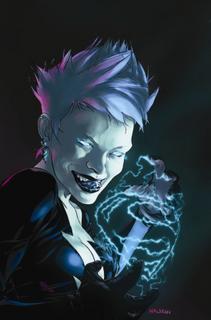 So, we've come full circle, it appears, as Livewire jumps back to comics. Hopefully, however, some enterprising young soul will recall Superboy's first superhero friend, and we'll see sparks fly in a confrontation between these cross-media twins.

Have they said why Simone's off Action? With the exception of Byrne's hobby of drawing... wildly different Jimmy Olsens from issue to issue, it's been kind of fun. And, God knows, it's the most issues of Action I've bought in a row in my entire life.

As for Sparx, poor kid's got three strikes against her: A name ending in "X," an origin steeped in a crappy summer annual event, and backstory in a Superboy comic where he's not the clone of half-a-Luthor.

I just hope to God they keep Livewire's insanely silly origin. Nothing like a DJ getting struck by lightning while calling Superman a nerd.

Yeah, apparently Dan DiDio wants rotating teams, on for about a year and then off.

Personally, that sounds like an excuse to kick Simone and Byrne off for someone who's more popular...doesn't look like Verheiden or Rucka are going anywhere soon. Maybe they're trying to get a more "showcase" feel with Action specifically.

But, given that Doom Patrol and Blood of the Demon are both ending, it seems like DC's just anti-Byrne lately, not that I blame them.