I'm not a Marvel Zombie, really. Not anymore. I can't say why for certain; I guess I just like my heroes a little more iconic and primary-colored than Marvel typically offers. Sure, I love Spider-Man as much as anyone, but most Marvel comics just don't draw me in the way they did when I was younger.

So, the first Marvel comic I'd write for free is... 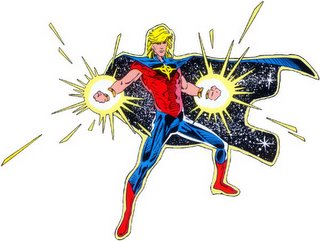 Quasar
I don't know much about Mr. Wendell Vaughn, Protector of the Universe. I've read maybe three issues of his title, and I think I've seen him in a half-dozen appearances altogether. But, man, look at that costume! That's one of the best costumes in comics, period. I've read more about Wendell than I've ever seen him in comics, and he really intrigues me. It'd be easy to write him off as the Marvel Universe Green Lantern, but he seems more than that. He's the Protector of the Universe; he alone has a jurisdiction that, in DC, is now patrolled by 7200+ space policemen.

And yet, he seems like such a nice, down-to-Earth, happy-go-lucky fellow.

So here's my proposal for a Quasar series: superheroic space opera meets Robert Kirkman or Dan Slott. "Green Lantern Team-Up," if you will. Wendell Vaughn is like Spider-Man without the bouts of depression and insecurity; Kyle Rayner without the vanity, brashness, and arrogance. He's always smiling, always helpful, and always friendly; the kind of guy you'd absolutely hate if he wasn't so damn likable. With his Quantum Bands and his fantastic costume, he patrols the spaceways, getting involved in every sort and scale of cosmic pandemonium.

I'd want to ape the Kirkman/Slott style of fun one-issue stories, building pieces of some greater story arc. Quasar would naturally be facing various moral and ethical dilemmas, the "scratch the surface to find social relevance" sort of sci-fi that seems sorely lacking these days.

But my favorite part of this idea would be the Earth trips. To close off each arc (i.e., once per trade), Quasar would make a trip back to Earth (since most of his action would take place in outer space). He'd inevitably get involved in some crazy brouhaha, face the running joke that the Avengers roster is totally different from the last time he visited, and he'd cap off the trip with chili dogs with Spider-Man.

Cosmic adventure. Superheroic fun. Hilarious action. Chili dogs. And I'd do it for free.

we all know how little i know about comics, but my god, Tom, I'd pay money for that.