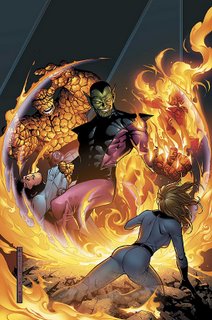 Okay, so the Super-Skrull has all the powers of the Fantastic Four, plus the regular Skrull shape-shifting abilities, right?
So, isn't Mr. Fantastic's power pretty redundant? Skrulls can already stretch; does Mr. Fantastic just give the guy more stretchability?
And I imagine the Thing's powers give him strength, but does he need to be rocky to use that (or any invulnerability he may gain from Ben's powers)? Since he's a shapeshifter, can't he just turn the rock into normal-looking skin and retain the powers?

Or is the Super-Skrull somehow lacking in the shapeshifting department?

I don't recall where I read it, but as I understand it the Super Skrull sacrificed a lot of his shapechanging ability to get the FF powers.

Best critique I've ever encountered of the Super Skrull is a song by Ookla the Mok titled "Theme from 'Super Skrull'" on the album Super Secret.

I wanna say that this came up in Earth X at some point. I do believe Super-Skrull uses his natural Skrull abilities to mimic Reed's stretchiness. I could be wrong, as there's such a massive infodump going on for like two-thirds of that series and I might be selectively remembering, but that was my understanding. 'Course, that said, you'd think a species that can be hypnotized into turning into cows could make their skin rocky without the aid of Kirby Technology, but what do I know? I ain't Stan Lee.

He can stretch way, way further.

He can still shapeshift.

This is all as of 1977 or something, though. But then again, how complicated does it have to be?