Everyone knows my unconventional feelings toward "Superman Returns" and my strong dislike for perennial villain General Zod; many are aware of my nostalgic love for the "Death and Return" story. But my against-the-grain Superman opinions don't stop there, true believers! On the contrary, they extend all the way back to those halcyon days when someone thought the best way to spruce up a Superman movie was to turn it into "Abbot and Costello Meet the Mummy," except with Superman as the Mummy and Richard Pryor as the comedy duo.

Yes, friends, I'm talking about "Superman III"--and, for that matter, "Superman IV: The Quest for Peace." I've always been far more partial to the latter than the former.

Now, I realize that talking about which of these movies is better than the other is a little like debating which pile of elephant dung stinks less, but the pointlessness of a debate has never deterred me from participating (after all, I'm a comic fan).

As a kid, "The Quest for Peace" always held a special place in my heart. I loved the Superman movies long before I developed critical faculties, and "Superman IV" was, full disclosure, my favorite. "Why, oh dear Rao, why?" you may ask. The answer at the time was really quite simple: it's the only one of the four where Superman actually fights a supervillain. Now, you might quibble about Lex Luthor and General Zod being potential supervillains, but my criteria for the term included simple things like "costumes" and "distinct powers." Nuclear Man wasn't much of a villain, but he was a damn sight better than Richard Pryor and that low-rent Luthor knock-off. 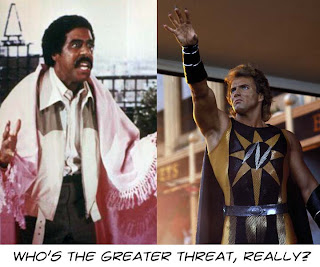 The biggest problems with both movies tend to be the over-the-top slapstick humor and the lack of any regard for the source material. Incidentally, "Fantastic Four," you may want to pay attention to this. "Superman III" is easily the worst offender on both counts. Richard Pryor's role is an embarrassment on every count; Gus Gorman less a character, more a collection of various characters from a terrible sketch comedy show. Is he a genius or a buffoon? Evil, or just stupid? Utterly incompetent, or an actor skilled enough to fool a crowd of people and the Man of Steel into believing that he's a general? Lenny Luthor may have been annoying, but he was consistently annoying.

And speaking of Lenny Luthor: oy. Why Lex Luthor, supposedly the world's greatest criminal mind, insists on surrounding himself with such ultra-morons is far beyond me. And as bad as Otis was, at least he was endearing in a doofy sort of way. Duckie should have stuck with Molly Ringwald.

I would, of course, be remiss in my discussion of the terrible humor in "Superman IV" if I neglected to mention the double-date scene. I can think of few movie clips that would qualify for Superdickery, but Superman making two dates with two different women at the same time (apparently so he can spend as little time with either as possible) and almost certainly risking revealing his secret, ranks right up there with destroying the world's money, tormenting Jimmy Olsen and Aquaman, and, well...this.

If I understand correctly, the campy slapstick humor is a result of what the Salkinds wanted the Superman films to be like in the first place. Less reliance on the comic book source material, more reliance on sight gags and the old "Batman" series. It's a shame that they didn't pay some attention to the comics; it's not like there's any dearth of material for seriousness or silliness in them. Why make up a new quasi-Lex Luthor character when you could just make Richard Pryor into the Prankster or the Toyman? Why invent Lenny Luthor when you could just as easily use his niece Nasthalthia (or, Nasty could have taken the place of the brother/sister duo in "Superman III," bankrolling Pryor's Prankster). And why, why on Earth or Krypton or any other planet, would you make a Superman movie where a villainous supercomputer is built and never call it Brainiac? How much better would "Superman III" have been with just that one small shout-out to comic fans? "It's the most powerful supercomputer in the world. I call it...Brainiac."

Okay, so it wouldn't be much better, but those little details do make a difference. Today's comic book movies are filled with those tiny Easter Egg shout-outs, which add to the depth of the fictional universe and act as a little wink and a nod to the comic fans, as though to say "look, we love these characters as much as you do." Those things being absent wouldn't be too great a loss; those things being conspicuous by their absence, however, detract from the story. And just as if you had Batman fighting a grinning psychopath named "Mr. Smiley," depicting Superman fighting a giant supercomputer that isn't named Brainiac takes away from the story.

This would be a good place to mention Superman's masonry vision (or, as I called it in childhood, "rebuild the Great Wall of China vision," a power with even more limited application than super-ventriloquism and the memory-wipe smooch) and the other powers he seems to gain and lose at random over the course of the series. It started out in "Superman II," where Zod telekinetically grabs the police officers' guns with his heat vision, or something, and the trend continues with the cellophane S-shield, the weird hand-beams, and the inexplicable hologram battle.

So, back to the "which is better" question, here's how it breaks down:

So, as my totally scientific table demonstrates, "Superman IV: The Quest for Peace" is clearly the less smelly turd. Why was I doing this again?

Anyway, somewhere up there I mentioned that each film contained the seeds of greatness. And it's true, there are elements, however small, of both these miserable Superman sequels that could result in fantastic films. They didn't, and probably never will, but that won't stop us from pointlessly considering what might have been. So tune in next time for "Movies I'd (Re)write for Free"!

Weirdly enough, you are not the first person I've seen use the exact phrase "rebuild the Great Wall of China vision". Perhaps this says more about the sort of people I spend time with than anything else.

Shameful confession time: I've never actually been able to watch Superman III all the way through. Cewrtainly not in a theater; tried a couple of times at home, bailed on it both times. But I've seen Superman IV at least twice and managed to enjoy it both times. Except for Ducky, of course. While still missing the mark by a wide distance, it actually came the closest in concept to what a Superman movie ought to aim for. Favorite moment: when Supes disposes of the world's nuclear stockpile by gathering all those warheads in a giant net, swinging it around in an arc to propel them into the sun. Straight out of a Weisinger-edited comic; it could have been copied directly from a drawing by Forte or Swan.

The basic script of IV in the hands of a good director with a decent budget could have produced something worthwhile. The script of III would have to be thrown out and rewritten from scratch to even have a shot; it was beyond salvage from the start.

I have not seen either movie, so the only thing I can say is: your first two links are broken.

They go to your Blogger post editor, not to the posts themselves. Thought you'd want to know!

I have no idea how that happened, Derek, but it's fixed now.

Rab: Agreed on all counts. That's pretty much what I'll be doing for my re-write pitches.