So, this thought has been rattling around my head for awhile now, and I keep wondering if it's actually some kind of insight, or if it's something that everyone else takes for granted and I'm just slow on the uptake.

Anyway, there have been quite a few characters in the history of the Legion who are analogs of "modern" heroes, intentionally or otherwise. Mostly, I think, this is because there are just a limited number of powers that superheroes generally have. And while I'm sure that this connection isn't intentional (as the future character debuted three years before the more contemporary one), it occurred to me recently that Ultra Boy is the future version of Ultra the Multi-Alien. 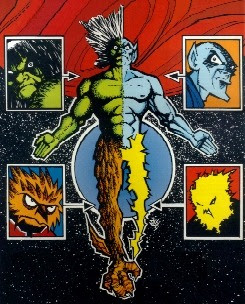 You probably all know Ultra Boy's schtick--normal guy gets swallowed by space whale and bombarded by energy, ends up with a slew of powers that he can use one at a time. Ultra's is a bit similar--normal guy gets shot by several different alien-transformation beams, ends up with a slew of powers that each correspond to one quadrant of his body. His left arm is magnetic, his right arm is super-strong, his right leg can fly, and he can turn one leg invisible, which really isn't all that practical, and unless you're extremely gullible, you won't get fooled by Super-Skru..oh, wait, sorry. Forget the last bit.

Point being, both "Ultra" characters have sets of powers that are quantized in some fashion, confined to solitary use or use from only one part of the body. While it might not exactly be the stuff great stories are made of, I think it's enough to warrant a team-up. I'd love to see them swap limitations; Ultra gets the one-at-a-time thing while Ultra Boy suddenly has flash-vision coming out of his left leg.

I, not being of godlike comic knowledge like you, had never heard of either of these characters, but now I must know more! Such odd power setups.

Anyway, that was all just so I could post this link without seeming random:
http://www.somethingpositive.net/sp02122008.shtml
You will appreciate its delicate subtlety better than I, I believe.