Bat-Month: "The Cape and Cowl Conspiracy" 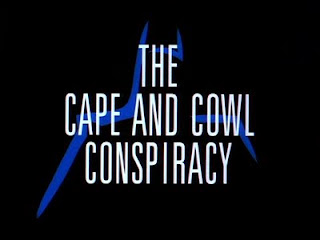 Let's get this out of the way right off the bat: "The Cape and Cowl Conspiracy" is not a good "Batman: TAS" episode. It's a terrible mishmash of different concepts, none of which really work together, and the plot not only makes very little sense, but comes off making Batman look like an inefficient jerk, while everyone else just looks like an idiot.

I think the biggest problem with the episode is also the reason I decided to review it rather than some more deserving Animated episodes. The plot centers around a villainous scheme to steal Batman's cowl, much like "The Contaminated Cowl." Such a scheme, you'd think, would be a ploy to expose Batman's secret identity, or a manifestation of the Mad Hatter's twisted obsession, but it's neither of those things. But what is clear to me from watching the episode is that this idea--a criminal trying to steal Batman's mask--was the core concept around which the rest of the episode was based.

Sometimes that kind of plot-anchoring concept can work, other times, not so much. Remember when I talked about the various deathtraps in "Almost Got 'Im"? When I said that any plot designed to lead up to such a trap would almost inevitably be silly and disappointing? "The Cape and Cowl Conspiracy" is proof of that. 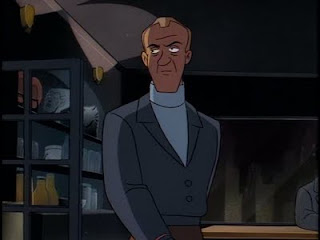 Take, for instance, the villain of the story, Josiah Wormwood. He's called "The Interrogator," because he's a master of torturing information from his victims with elaborate death-traps. How does he lure victims into these traps? Why, by leaving them clues in the form of rhyming riddles.

Which brings us to our very first problem: Wormwood is a cheap knock-off of the Riddler, who had yet to appear in the series. He uses his riddles and a quicksand trap to catch a diplomatic courier, in order to extract the location of a large cache of bearer bonds.

The theft brings him under police scrutiny, which naturally gets Batman involved. Batman goes after Baron Wacklaw Jozek, one of Wormwood's associates, hoping to find out Wormwood's whereabouts. To this end, Batman abducts the Baron from a society dinner, where he has just started giving a speech, in front of dozens of high-class patrons. I can understand the need for speed and the desire to publicly embarass Jozek, but it seems like it would have been in Batman's best interests to pick up Jozek in a slightly less public venue. He dangles Jozek by the suspenders from a billboard until Batman gets the information he needs. 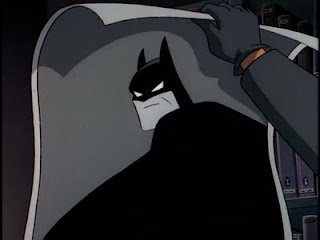 Shortly thereafter, the Baron calls in Wormwood to offer him a job: steal Batman's cape and cowl. He does this with a poster-sized portrait of Batman, which opens up vast new questions. Wormwood is curious as to the Baron's reasons, so Jozek offers a trade: he'll explain why he wants the cape and cowl if Wormwood tells him about the bearer bonds.

At this point, any mildly intelligent criminal would have been searching Jozek for the wire that he's clearly wearing, but instead Josiah plays coy and agrees to the job. His first attempt to catch Batman--involving an amusement park and a woman tied to train tracks--failed miserably to produce any new headgear. Consequently, he lured Batman to a wax museum--which at this point I believe are frequented more by supervillains than by patrons--where he assaulted him with a hot lamp (to melt the wax, you see) and then some deadly nerve gas. Finally, Batman removed his cape and cowl to give them to Wormwood.

Now, here's a scene that should have been tense and suspenseful. Batman's in the shadows, having removed his mask, and Wormwood is forcing him to step into a spotlight to deposit it! How will he protect his secret identity? As he stepped into the light, the viewer would have seen the unexpected--Batman's wearing another mask underneath! Unfortunately, all that suspense was spoiled long before Batman reached the spotlight, thanks to this image: 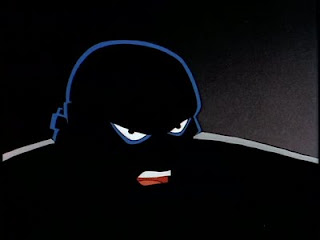 Even before Batman reaches the spotlight, it's trivially obvious that he's wearing another mask. A scene that might have brought this episode up from bad to mediocre and memorable, thanks to a stunning example of Batman's foresight, was robbed of all drama by this poor direction, lighting Batman just enough to see the trick.

Wormwood takes the prize back to Jozek, asking again why he wanted them. Jozek reminds him of the quid pro quo agreement, so Wormwood spills the bearer bond beans. Jozek then reveals his reason for wanting the cape and cowl: to wear them! Because he's Batman in disguise!

Naturally, the place was bugged, and Jozek had fled the country after his run-in with Batman. So the police got Wormwood's confession, and after a too-long fistfight, Wormwood got apprehended.

Unfortunately, this episode spectacularly fails the fridge logic test. If the information about these bearer bonds were so important, why waste so much time setting up this overly elaborate cape-and-cowl scheme? If Batman were behind the plan the whole time, why did he defeat Wormwood's first deathtrap? If Wormwood is so intelligent, why didn't he realize that he was being bugged? If Batman knew he was going to get Wormwood to confess--on tape!--then why didn't he have any police standing by, rather than letting Wormwood fight him through the penthouse and its rec center?

But the real nail in the coffin for this episode, as far as I'm concerned, is the thematic one. You have a villain who is expressly said to torture people with deathtraps in order to get information from them, a villain known as "the Interrogator." You have the Batman, who routinely--including in the first act of this very story--puts criminals and informants into potentially life-threatening circumstances in order to make them confess or otherwise give up their information. The thematically satisfying plot would be to have Batman out-interrogate the Interrogator, to pit his own deathtraps against him, and to ultimately turn all of his careful plans back in against him. This doesn't happen--despite being wildly foreshadowed--instead proffering a silly plot about stealing Batman's mask.

Not only does this insanely circuitous plan make Batman look like he's just toying with both his enemies and the police, but his abduction of Jozek and the way he casually belittles Commissioner Gordon when they're examining Wormwood's riddles ("of course! Isn't it obvious?") makes him come across as a bit of a dick.

Overall, "The Cape and Cowl Conspiracy" is a less-than-mediocre episode hampered by its generic, cobbled-together villain. It suffers worse from comparison to better episodes in the same season, featuring the villains who The Interrogator evokes.
Posted by Tom Foss at 10:01 PM