Bat-Month: "Mad as a Hatter" 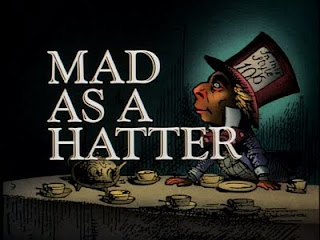 Oh, hey, it's a Batman: TAS episode about date rape!

Which, I guess, is better for the Mad Hatter than various comic insinuations that he's a pedophile or a...chapeauphile.

I really enjoy this version of the Mad Hatter, and I think Roddy McDowall made the perfect voice actor for the character. Sure, I'm a fan of Gail Simone's deranged version in "Secret Six," but I think the "diminutive bizarrely perverted mind-controlling supervillain niche" is already filled by Dr. Psycho. Jeph Loeb's version has never made much sense to me, partnered with the Scarecrow as the two personality-free villains who constantly talk in verse and quotations. At least the quotes make some sense for Hatter; that version of Scarecrow is just weird.

The problem with most of those versions is twofold: first, Gotham City, for whatever reason, is teeming with insane criminals patterned after Alice in Wonderland characters--Tweedledee and Tweedledum, the Wonderland Gang, Humpty Dumpty, and now the White Queen--so it's easy to strip Jervis of the traits which make him stand out as an individual. Second, the foremost of those individual traits is that he has various devices which allow him to control people's minds, and when you turn him into someone so insane that he can no longer speak except in Carroll quotations, then you make him seem like someone who could never have developed such technology.

So the Animated Series, as it so often does, strikes a balance: Jervis Tetch is a nerdy scientist, and Alice in Wonderland is his favorite story (so he quotes it occasionally) and has mind control cards which are connected to a headband. He conceals the latter in a hat and, for flair, puts the Hatter's fractions on the cards. And then he woos a co-worker named Alice by mind-controlling everyone they come in contact with, providing the perfect date.

And the date actually is pretty thoughtful. Sure, it's clearly a "perfect date" concept that has been rattling around in Tetch's mind for a long time--dinner at a fancy restaurant with VIP treatment, an after-hours trip to an amusement park (with an Alice in Wonderland-themed exhibit), and even a dance. There's always the sinister undercurrent--the mind-control cards in everyone's hats or hair, illustrating the lengths to which Tetch has gone to ensure that nothing goes wrong. Knowing that Tetch is the kind of person who would even consider mental enslavement as an acceptable alternative to mild embarrassment paints him as somewhat unhinged, but he's clearly not malicious or harmful...yet.

But this kind of personality is teetering on the edge of violence, and when Jervis finds out that Alice has forgiven her boyfriend--and accepted a marriage proposal--he goes a little over the edge.

And so the situation escalates until Batman is fighting a mind-controlled army of Carroll-inspired thugs in the Storybook Land Amusement Park, while Alice sits as a glassy-eyed puppet through the whole battle.

The episode ends, fittingly enough, with the Hatter trapped under a fallen Jabberwock sculpture, while Alice is happily reunited with her fiancé. The reunion bit wasn't entirely necessary--Alice and Billy weren't particularly three-dimensional characters--but it's a nice moment, made all the more symbolic by the fact that their happily ever after rescue happens in the Storybook Land park.

In any case, this is probably the best episode about the Mad Hatter. It does for Jervis what the Animated Series tended to do so well, providing villains with sympathetic backstories and moderately comprehensible motivations. It's not the best episode to feature Hatter, however, and I'll see about getting to that one in the near future.
Posted by Tom Foss at 10:43 AM

My favorite episode of BTAS, bar none. My only criticism of it is that the animation budget seemed a little low that week.

The thing I found most creepy about that episode is that even though no attention is paid to it, Tetch must have changed Alice's clothes himself. It's easy to see him as somewhat less disturbing than other Bat-villains until you notice that detail.