"Snow" is an interesting story that brings a lot of great ideas to the Batman comic continuity. How successful it is at bringing those ideas is somewhat debatable. Running in "Legends of the Dark Knight" in 2005, "Snow" is ostensibly a means of bringing the Animated Series version of Mr. Freeze's origin into the DCU proper. What it ends up being, though, is an origin story for the Batman Family.

As with something like 84% of all Batman stories, this is set in Batman's early career--explicitly, "year one and a half." It begins with a nice scene of Alfred, checking the mansion for signs of Bruce, and finally finding him, sprawled and bloody, in the cave. This leads to an interesting scene where we learn that Bruce Wayne owns a hospital bed, and has at least one room of his mansion decked out in medical equipment. Sure, that makes sense, but it's interesting to see the contrast of medical equipment and posh hardwood floors. 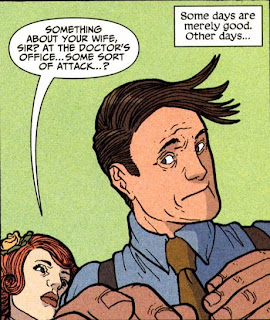 The cuts over to Victor Fries present us with what we'd more or less expect. Victor is a distant and somewhat inattentive husband, and Nora is sick with an unknown illness. Victor is naïvely working on a cryogenics project for the military, believing that they would only use it as a deterrent, not a weapon. He also has the worst haircut this side of Egon Spengler and appears to be working for Groucho Marx. After an attack, Nora is diagnosed with Huntington's Disease.

Meanwhile, there's some friction between Batman and Gordon over the former's apparently crude and dangerous methods. After a tense and terse conversation with Harvey Dent, Batman realizes that he needs allies who aren't hampered by the red tape, regulations, and procedures of professional law enforcement, so he lays out a set of files and photos as if he's going to choose Brad Meltzer's next Justice League. Batman sets about recruiting a motley crew of civilians with a variety of personalities and skill sets, and giving them a headquarters in a well-stocked suite.

Nora is rapidly getting worse, so Victor takes her to the cryogenics facility, apparently hoping to put her in stasis. Unfortunately, the device doesn't react correctly, and it turns out that Fries's employers have been running the weapons testing protocol on the device behind his back. He shuts the process down, but Nora's left encased in a block of ice1. Distraught, Victor turns off the safety devices and lets the cryogenic device explode, hoping to commit suicide.

Quick question: has there ever been a successful suicide attempt in a comic book? It seems like any time it happens, it's the prelude to a heroic resurrection or superhero/supervillain origin story.

Of course, Victor survives. He's delerious now, hallucinating Nora as a weird sort of vengeful fairy. He goes after the coworkers who betrayed him, and inevitably his path crosses with Batman's team. Some ill-fated fights leave various members of the Bat-team injured and angry, until one of them goes rogue and tracks Mr. Freeze down himself. The rogue gets frozen and shattered, but not before shattering Nora's frozen body.

Eventually, thanks to the Bat-Team's ingenuity and some good old-fashioned punching, Batman stops Mr. Freeze, though he escapes to plague the Bat another day. Unfortunately, the danger, death, and dismemberment of the team has led Batman to cut them loose--although they were going to quit anyway.

Reflecting on the events, Bruce realizes that he does need backup, but a team presents the problem of conflicting personalities. Instead, he needs someone who can watch his back, someone he can train himself. And wouldn't you know it, there's an ad for Haly's Circus in the newspaper, featuring the Flying Graysons.

I liked the story when it first came out, and I think that it's pretty good overall. The "early Batman" stories are kind of hit-and-miss for me; I understand the appeal for the writers, but I think they tend toward redundancy. Ultimately, the "year one" stories are an extension of the same tactic that gets used throughout fiction where super-powerful characters must be written into dramatically tense situations. Superman gets his powers removed or gets exposed to Kryptonite; Spider-Man's web-shooters break or run out of fluid; the Star Trek away team gets cut off from the ship, the communicators, and the transporters; the slasher heroine's cell phone doesn't have any reception; and Batman gets his utility belt taken away. The "year one" stories go one step further, taking away all his vaunted experience and skill. I understand the need for these kinds of stories, and done well, they can be very good. But done poorly--or too often--and they look like a crutch, like an admission that the plot doesn't fit the characters, and so the characters must be changed to fit it.

But this story never feels like that. Instead, it forms a much-needed bridge between Batman-the-loner and Batman-the-father. Quite frankly, it makes little sense that Batman would jump straight from a solo mission to training a young boy as his partner. This story makes the process a more gradual one, where he tries to form a backup team, but runs into various problems with their individuality and lack of training. His conclusion toward the end feels a little forced, but this chapter in the Batman history explains why he'd be open to training a Robin and taking on a Batgirl.

The Mr. Freeze story fares less well, though. For Batman, Freeze exists here as a glimpse at the future of his crimefighting endeavors: no longer just mob bosses and grinning psychos, but also deranged supervillains with deadly weaponry out of science fiction stories. Freeze represents a further escalation of the Gotham villain, and shows Batman the need to expand his own operation. Freeze serves that purpose well, but the Freeze origin story falters a bit in the process. As with a lot of things, the Animated Series gave us the best Mr. Freeze, largely because it provided him with a touching and tragic origin and motivation. This story attempts to do the same, and hits most of the key points: Victor scientist, Nora sick, attempted freezing, process foiled by unscrupulous superiors, failure of cryogenic device creates Mr. Freeze, revenge. Unfortunately, there are some twists and turns that I'm less happy about, chief among them making Freeze delusional. I understand the parallel--in the beginning, Fries was inattentive and distant, not really paying attention to Nora, and assuming her agreement with his desires. After his transformation, Nora became an avatar for his desires once more, a hallucinatory guide to spur Victor on toward vengeance and to assure him that she could be revived.

I don't care for the idea of Mr. Freeze being crazy. The Animated Series version of the character was hyper-rational and totally emotionless...what's the word for that? Oh right, cold. The version of the character that this story is trying to evoke (at least in terms of the origin) was tragic and relatable precisely because he was so clearly sane, a man driven to do terrible things by remorseless anger and the desire to feel something again. He's the classic character with nothing left to lose, and I think some of that falls away if he's lost his grip on reality as well.

In a more nitpicky vein, I thought it was strange to give Nora a real-world ailment. I understand the desire to make the Batman mythos relatively believable, but I think there's always a danger in setting up real-world diseases as "incurable"--the same way that there's a danger in curing those diseases with sci-fi or magic within a superhero universe. I guess I just expect characters like Nora to be dying of some fictional ailment, not sharing a diagnosis with Thirteen.

Aside from the characterization missteps with Victor, though, I think the story is quite good. I really enjoy the characters in Batman's army, and I think it'd be interesting to see some of them make a return in the modern day.

And the art? Half of the reason I bought this when it first came out was Seth Fisher's art. I became a fan of Fisher through "Flash: Time Flies" and looked forward to his take on Batman. The art is everything you'd expect from Fisher: clean, incredibly detailed, and often bizarre. There are a couple of places where the art goes a little overboard on the cartoonish/presentational side of the continuum...

...but overall the book is absolutely gorgeous. Seth Fisher, like Mike Parobeck and Mike Wieringo, was one of those fantastically talented artists with an amazing style who left us far, far too soon. "Snow" is just a small example of the kind of things Fisher was capable of, and it's a real shame he didn't leave behind a more extensive bibliography.

In summary, "Snow" is an amazing-looking book with a slightly less amazing story, which nonetheless fills a new niche in the "early Batman" mythos. Taken all together, it's quite good, and it's among my favorite of the many stories in this era of the Dark Knight's career--even if I don't care for this version of Mr. Freeze.

1. Presumably to be rediscovered by the Sub-Mariner decades hence.
Posted by Tom Foss at 8:47 PM