I recently did a little back-issue binging, and with my recent post about great Superman stories fresh in my mind, I figured I'd write up a couple of thoughts. I hope to do this periodically, since I have a big ol' stack of older Superman comics taking up space on my desk, and it's not like I'm not going to read them. 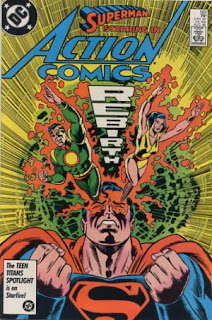 Synopsis: Superman's having strange dreams about Krypton's destruction, which lead him to the revelation that Jor-El tried an experimental machine to store his and Lara's brainwave patterns inside young Kal-El's mind before launching him into space (shades of "Wrath of Khan" there). Superman consults the universe's greatest medical minds and develops a machine that will use his cells (which have a genetic record of his ancestors) to build new bodies to house the mind-patterns stored within his brain. And so Jor-El and Lara are re-born. 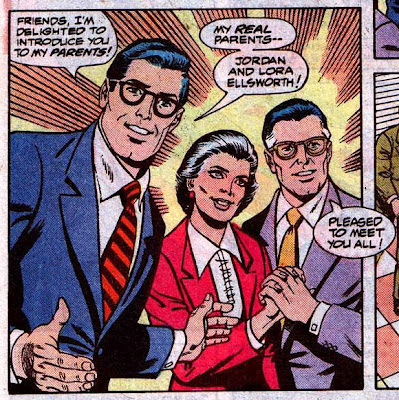 I'll chalk Clark's "real parents" line there up to exuberance; after all, these are people he hasn't seen since infancy, barring the occasional trip back in time. Of course [SPOILER ALERT], as it often is with these sorts of stories (Spider-Man would get the same plot a decade later), it's too good to be true. Superman has a fight with his super-parents at the Fortress of Solitude, which ends with them strapping him to his rocket with his indestructible cape, rigging the Kryptonian fuel inside to super-explode and super-kill him. Naturally, Superman escapes, and it turns out that his "parents" were actually noncorporeal entities captured and reprogrammed by a pair of gambling aliens, betting on whether or not Superman would break his code against killing (which, you'd think, would be a dangerous bet to win). Superman traps his "parents" in a noncorporeal state, and imagines that they'll soon forget their foray into corporeality.

Thoughts: I enjoyed this story as a nice done-in-one, and a look at what Superman would do if his birth parents really could be resurrected. In fact, this story would have been great except for one thing: the cop-out at the end. Under normal circumstances, sure, that genie needs to be put back into the bottle. Bringing Superman's parents back to life removes a driving source of pathos, and while it opens up new story avenues, it runs the risk of being seriously problematic (see also: Jor-El in "Superman II," "Smallville"). But this wasn't a normal circumstance. One month later, in "Action Comics" #583, was the second part of a story that began in "Superman." A story called "Whatever Happened to the Man of Tomorrow?" Which means this was the very last pre-Crisis Superman story in Action Comics. Why not let Superman have his semi-happy ending? Why not let Jor-El and Lara be resurrected as the coda to Superman's Silver Age adventures? Any other month, and this story's circuitous alien plot would have been not just expected, but necessary. In August of 1986, though, it just seems cruel.
Posted by Tom Foss at 6:42 PM