You're no doubt all familiar with Miracle Monday, the holiday celebrated universe-wide on the third Monday of May, to commemorate Superman's triumph over evil itself. There's a lesser-known Superman-related holiday, though, and one with a bit of the...opposite tone. That's right, ladies and gentlemen, April 15th shall live on in infamy as the anniversary of Superman's Day of Wrath, commemorating the day when the Man of Steel began a three-week-long crusade to eradicate his enemies from the planet. 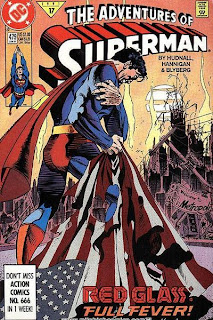 Synopsis: Superman returns from a trip into space, and immediately foils a mugging. But when both the muggers and the muggee are afraid that he'll kill them--and when the muggers are vaporized by a "sonic blast" coinciding with Superman yelling, it begins to look like their fears are justified. Superman follows the mugging victim, straight into the "Museum of Dead Villains," where he learns about the aforementioned Day of Wrath. The museum houses macabe reminders of Superman's departed foes--Brainiac's broken spaceship, Prankster's gadgets, what's left of Metallo's body, Mr. Mxyzptlk's crystal-encased skeleton, and a host of wax dummies on loan from Mme. Tussaud's. In his rampage, Superman apparently killed everyone from Brainiac to Maxima to Darkseid to the Joker. Even Otis's skull is on display. When Superman leaves, he's confronted by a livid, wheelchair-bound Lois Lane. He tries his X-ray vision, to make sure she's not an elaborate android, and ends up heat-vision blasting her to death. This sort of thing continues until Jimmy Olsen kills Superman with a chunk of Kryptonite.

And then things get weird. 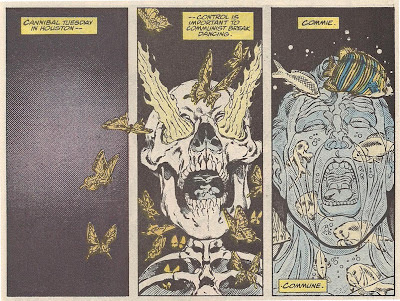 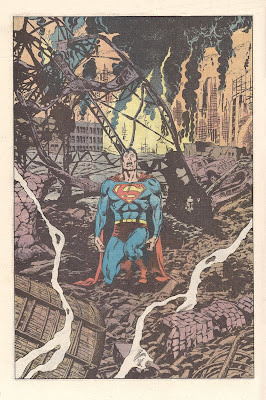 He gets ambushed by J'onn J'onzz and Guy Gardner, who he kills, though kind of accidentally. And then the army shows up. And it's not long before Superman goes full-on Plutonian. 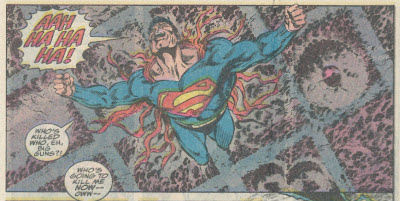 But surely Grant Morrison's Doom Patrol will save the day, right?

The ending of the little saga reminds me of something out of a Star Trek episode, and I won't give it away entirely. These issues aren't too hard to find, and they're worth checking out.

Thoughts: This was definitely the trippiest Superman comic I've read since the Steve Gerber/Gene Colan "Phantom Zone" miniseries (which I may post on later, since it was a recent acquisition and is great). It's not just because of scenes and captions like the ones above, or huge full-page shots of the ruined Metropolis, though those qualify. It's because of what it does to you as a reader. I compared Superman to the Plutonian of "Irredeemable" above, and there are definite similarities--how could it be avoided? Both are stories asking "what if Superman went nuts and killed everyone?"

The big difference, and I think it's what made this story so powerful for me, is in reader identification. We the readers enter the universe of "Irredeemable" after Plutonian's heel turn. Outside of flashbacks, Plutonian is never the hero to the reader; we always identify Plutonian as the villain and the ragtag bunch of rebel heroes and villains as the protagonists. So when Tony incinerates children or commits other atrocities, we're recognizing him for the horrible person he is, and hoping that the heroes can eventually stop him.

And when he starts taunting his enemies, bragging about his kills? Well, that's when the dissonance really hit me. That's when I finally started to see that maybe this guy who's just murdered five Justice Leaguers wasn't necessarily the hero of the story. That's where it got uncomfortable. We see superhero vs. superhero battles so often, see them turn out to be misunderstandings or pass by without lasting consequences, that I think they lose their impact. This one really, actually impacted me, and even though it seemed like something larger was clearly going on, by the end even I was wondering if I should be on Superman's side.