Why I Hate Saturn* 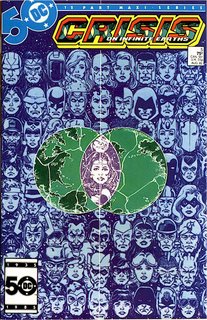 I hate the Multiverse. I hate it with the burning passion of the infinite suns that light its pitch-black skies. I want DC to play home to one Earth. Just one. Not two, not five, certainly not X, and not Infinity.

I know when it first started, too. It started with Who's Who Volume IV. I didn't own the comic until recently, but someone I knew in 3rd grade, knowing I was a comic fan, brought it to class a couple of times, and I absorbed its wealth of information. This was my first exposure to the Calculator and Calendar Man! My first glimpse at Captain Marvel! My first look at Changeling! And, sadly, my first induction into the world of the DC Multiverse.

"Why are there two Catwoman entries?" wondered my nine-year-old brain. "When did Catwoman and Batman get married? They had a kid? Catwoman's dead?"

I didn't understand the concept of Earth-2, and to be fair, I really didn't have much context for it. That would have been 1992-93, and I didn't start actively reading DC until December of '92 (though I have the sneaking suspicion that Who's Who crossed my path in the Spring of '93). But I have since encountered plenty of material on the various Earths, and I feel very secure in my utter hatred for their existence.

I don't like the idea that there could be more than one of Superman in a fight. More than one of Batman seems like overkill, especially given the existence of Nightwing, Oracle, and Robin. The Batman family of Multiple Earths could potentially include Batman-1, Batman-2, Robin III/V-1 (since Tim is the 3rd and 5th Robin), Robin-2, Nightwing, Huntress-1, Huntress-2, Catwoman-1, Catwoman-2, Batgirl II-1, Oracle, Bat-Girl-2, and Bat-Woman-2. Superman's family? Superman-1, Superman-2, Supergirl III-1, Power Girl, Superboy-1, Superboy-Prime, Krypto-1, Krypto-2, Steel I, and Steel II. Four of them are each nigh-omnipotent.

I don't like splitting up the universe and the dynasties. The best thing about the original Crisis is that it gave us a generational DCU. Superman wasn't the first, last, and best Superhero, he just kicked off the modern age. There was a whole generation of heroes before him, and there's a new generation coming after. That's one of the things that makes the DCU so unique: it's all about family and pantheons and legacies. That wouldn't be the case if each generation operated on a different Earth.

"Dark Flash" established the more important point that crossing Hypertime barriers was dangerous to the universe. It caused other Hypertime anomalies to leak through and build up until something got corrected, or until whole universes ate each other.

Hypertime also makes more sense in a quantum fashion, where every choice spawns multiple new tributary universes, and there isn't necessarily a single "right" one.

But Hypertime won me over through underuse and hyperregulation, so it wouldn't become the trick-of-the-week parallel universe MacGuffin.

You want to know the biggest reason, though? I hate explaining it to people. I'm a bit of a DC history buff, and people know that, so I get questions. Especially about Superman. And more often than not, the answer to those questions starts with "yeah, originally, before they restarted his history in '86." Which inevitably leads to a convoluted answer to their original question, as it was in pre-Crisis and as it is now.

So, when a friend of mine starts discussing a story she read some time ago where Batman and Catwoman got married, and asks for further info on that, I have togo into the whole history of Earth-2, what makes it different from Earth-1, and all that.

Explaining DC history post-Crisis is hard, but it's not nearly as hard as trying to explain pre-Crisis stuff, or things that bridge the gap. I don't like doing it. It's prohibitively confusing to newcomers and non-fanboys.

Meanwhile, the heroic dynasties add to the mythoses. They give characters legacies and history. They give the universe cohesion and a rich tapestry of history. They make sidekicks make sense.

You've pretty much summed up my opinion as well.

In fact, I'd go so far as to say that COIE has made any subsequent relaunching of the DCU unnecessary.

If they want a new, younger Trinity for the next generation, yeah, they could do yet another relaunch and tell the same damn origin stories over again, or they could do something actually original and pass the names down.

Kon-El, Tim Drake and Cassie Sandsmark are around the same physical age. All three share a legacy and a lineage of sorts with their mentors, and all three share important qualities of the Trinity before them while being their own unique characters.

I think, if they do decide that Clark/Bruce/Diana are getting too old for their roles, instead of relaunching the universe, they should consider passing down the roles. Make them generations and legacies to pass down and inspire anew like everyone else.

Hear, hear. I've just read through "Crisis", and that itself sums up just how bad the whole Multiverse idea is. You can have separate worlds, fine, but people are going to want to have crossovers, and nobody wants to see the JSA vibrating into the universe of 100 Bullets, or vice versa. Definitely nobody wants to see Mitchell Hundred crossing over with anybody else.
It's not about continuity. Continuity isn't that important, even in a single universe. Heck, look at the Doom Patrol. It's about how you can use the characters, and what limitations you set upon them.

I find the entire thing fascinating.

I've been reading comic books since I was a little kid and one of those was The Adventures of Superman, post-crisis. I never knew until I got older that there had ever been anything different from what I knew the DC Universe to be.

And now I'm excited that there's this whole history out there that I know virtually nothing about. Batman was married to Catwoman? Incredible. There was a Superwoman? Wow.

I'm not sure why I find this so exciting. Maybe it's like finding out that my parents were superspys in another life or something.

Am I excited about the possibility of a multiverse in the future? I, personally, would be entertained to read the regular DCU stories and get all that more, but I don't think it'll happen. As you illustrate, Tom, the multiverse is pretty confusing to the unprepared mind, and I doubt DC would do anything offend potential readers.

I side with you on hating the multiverse. Though you don't touch on what I think is the biggest reason to hate it, which is that it saps DC comics of much of their realism. Multiple earths of any number allow for too many wild new ideas to be introduced without any consequences.
As long as the multiverse existed DC could always have their cake and eat it two. DC claims to have started the Silver Age with the introduction of the Barry Allen Flash. Great except they brought the Jay Garrick Flash back within a few years. How can it be a new era if all the old characters were around? Yes in theory they were in another world that most people didn't know about, but to the reader they were for all intents and purpose sitting in the next city over. This kind of stuff happened all the time.
"Oh you really liked the Justice Society well they're still allive in Earth-2."
"We want to use Captain Marvel even though he has no history with any of our characters and no real place to fit into our established stories. I know we'll just make a knew Earth for him to live on"
There's no consistancy or continuity, every story the creators thought of got printed and all of it had absolutely no consequence. I feel that for a story to be meaningful, I have to believe that the consequences of this action mean something. If there can be an Earth where WWII never ended, then what's to say anything is ever final in a multiverse system.
I really liked that around the '90's DC tried to really change up some characters and stuck with it. Even if some of those changes didn't work well, the new Hawkman for instance, some of the other ideas brought a lot of good stuff to the table, like the new Green Lantern and Green Arrow. I thought it was a very mature approach by DC to accept that the past was past and they should try and move onto the future. Retconning was still possible but only if you were willing to change a character's entire history (see Superman: Birthright). Of course that wasn't good enough for old and crusty fans who wanted comics to be exactly like they were in 1965. Listen the only way I would buy those comics was if the cover price went back to being 12 cents an issue. If I'm going to follow these characters for months on end, I want to watch them live with their actions
If DC were to ever bring back the multiverse it could lead to Kyle Ranner being exiled to Earth-17. The introduction of Earth-W so that we could have annual crossovers between the JLA and the Authority. Even worse the inclusion of alternative Earths that include Captain Carrot or the Powerpuff Girls would only serve to waterdown the seperate and distinct reality those properties established. With the multiverse people get to make dumb decisions than ignore them. At least have the courage to accept change and make it a part of the stories to make them more meaningful, more realistic, and better for everyone
Check me out at The Captain of History