Seems like everybody remembers their first comic. I feel a little left out, to be honest. I have no idea what my first comic was. 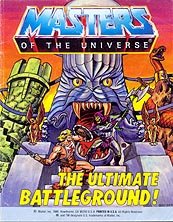 Well, that's not entirely true. I imagine that my first comic was one of the many that came with the He-Man figures. I remember my dad reading them to me in bed when I was much younger, at my request, I'm sure. I still have all of mine in a tin that once held Danish butter cookies.

I know that my parents both collected comics at one point; my dad's, like so many others, were thrown out by his parents, but many of my mom's survived. Both my parents had once been avid readers, especially of science fiction. My dad had always gotten flak for that from my grandpa, who thought it was garbage, so I managed to never get any of the "rot your brain" speeches. 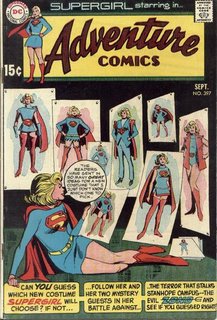 For years, I read my mom's comics in secret. They were under the bed in the guest room, for unfathomable reasons, and so I thought that I wasn't supposed to look at them. I couldn't tell you what indivicual issues were there except Superman #230 and Adventure Comics #397, the ones that I still remember the covers for. But I remember most of the stories. There were some 80-page giants with Metamorpho and Green Arrow tales, there was at least one Johnny Quick back-up story, there was one story where Superman fought Green Lantern and used the yellow shield on his cape to block his ring's effects. There were a bunch of Legion of Super-Heroes stories: one where Princess Projectra and Saturn Girl return to Legion headquarters, only to find that no one remembers them, and they've been replaced with Prince Projectra and Saturn Boy. I remember the one where the Legionnaires get imprisoned by three-eyed aliens led by evil Nardo, Matter-Eater Lad gets fat, and Blockade Boy dies. The ones I remember most, though, were the Super-Sons: Batman Jr. and Superman Jr. If you want to see Superman at his dickiest, watch him knock his son down with super-breath during a potato sack race; watch him take away Clark Jr.'s powers with gold Kryptonite for no good reason, then guiltily transfer his own powers to the boy. Good times. 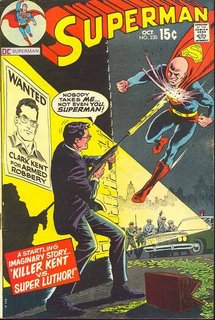 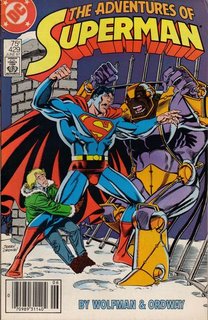 I know the first comics I ever picked out for myself included a couple of Thundercats issues and Adventures of Superman #429. It always bothered me that the Thundercats comics were so poorly colored, and that they couldn't get the chant right (Thunder x3, Thundercats Ho!). I know that the first places where I'd buy comics were Books, Comics, and Things and Scott's grocery store in Fort Wayne, Indiana. I started buying Batman 'round the 480s, where it was mostly Denny O'Neil and Tom Mandrake and Jim Aparo and such. I picked up quite a few Marvel Tales featuring Spider-Man and X-Men Classics and Teenage Mutant Ninja Turtles Adventures. 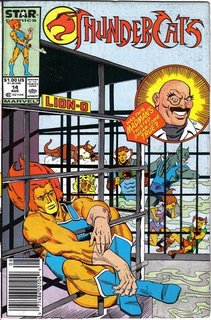 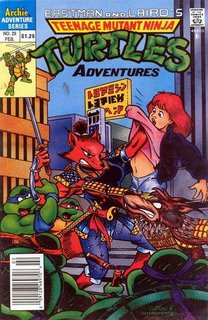 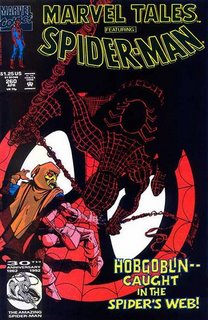 At some point, I got a couple of boxes of random comics out of a Sears catalog, and that started my collection in earnest. Before long, I was subscribed to Amazing Spider-Man and Daredevil. When we moved to Ohio, I dropped the Spider-Man subscription for the four Superman books, right 'round the time of his death (I even registered on a waiting list for Superman #75 at some comic shop around Cuyahoga Falls). Over 13 years later I'm still subscribed, though I'm nowhere near Cuyahoga Falls.

So, yeah, first comic? You got me. I can't remember my first kiss, either. In the end, the firsts aren't what really matter, though, are they? It's what comes after.

Dude, I totally have that issue of TMNT Adventures. It was one of my earliest comics as well. I had no idea what was going on...

Yeah, that's the first TMNTA I bought. After that, I was forever torn by whether I wanted Raphael with the comics' foxy Ninjara or the cartoon's amphibious Mona Lisa.

The first American comic I bought was Showcase 61 (Spectre) at the age of 8. I find it strange that people say they can't remember the first comic they bought/read. It was a major point in my life. I still collect comics 40 years on and I can remember where I bought every single issue. Which either means: I have an incredible memory or I am a very sad individual.