A Geekend in Nerdvana

This past weekend was a geekfest. I geeked out. James Kakalios warned me not to have a geekgasm. I played a wine glass. I moderated a trivia contest where the answer to one question was "The Sun is a Mass of Incandescent Gas." I watched people explode five gallons of non-dairy creamer. The nerd gods smiled upon me and granted me a weekend that somehow incorporated physics, comic books, video games, epic literature, and blowing stuff up.

Friday night, we began the Society of Physics Students Zone 9 meeting, a semi-annual event which Augie decided to hold this time 'round. We had a decent buffet dinner, a panel discussion featuring folks from a variety of colleges 'round the midwest discussing grad school admissions (yeah, something that would have been useful last year), and then James Kakalios gave a speech about the Physics of Superheroes.

I only started reading his book on Thursday, even though Jon got it for me back in December. What can I say, I'm far behind on reading for class; I barely have time to finish the comics I get every week, reading for pleasure has fallen by the wayside. I'm happy to say that it wasn't what I expected it to be.

I own Mark Wolverton's The Science of Superman, which started from Superman's basic (modern era) power set and the proposed in-comic explanations for those powers, then explains how they might realistically function, so I expected this to be more of the same.

Instead, Dr. Kakalios starts from the position of a Physics Professor trying to make Physics class interesting to bored students, so he uses examples of where superhero comic books got their Physics right. He starts from real life science, and uses superheroes to explain it. In other words, this is more a science book than a superhero one, a good primer on basic Physics concepts seen through the lens of superheroics. Speaking as a Physics major and Comics fan, it's fantastic. It's the perfect merger of two of my favorite things.

It's also one of two books I have signed by Physicists. The other is Brian Greene's The Elegant Universe. I like Dr. Kakalios much better (to be honest, Greene was quite the giant douche). Here's the awesometastic autograph: 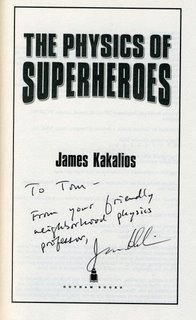 To Tom - From your friendly neighborhood physics professor, James Kakalios
His speech was mostly material from the book, but the flourishes he adds in person really make the experience (like when he pulls out a pipe, mentioning that when you become a real scientist, they give you a pipe. Incidentally, between the pipe and the tweed jacket, he looked quite a bit like Doc Magnus). I was in dork heaven for an hour and a half. It wouldn't be far off to say that he's the best there is at what he does, and what he does is awesome. 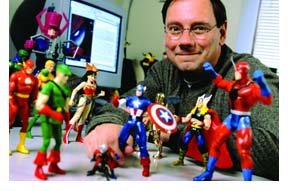 I got to chat quite a bit with Dr. Kakalios before and after the speech, generally geeking out, bringing up classic quandaries like "how does the Thing swim" and "DC or Marvel?" He's a supremely nice guy, and it was a real honor to meet him.
Overall, it was one of the most entertaining evenings I've had in a long time. I wish I could have talked with Dr. Kakalios more, maybe gotten a picture with him, but there'll be time for that when I'm in a doctoral program. Remind me to add University of Minnesota to the list.

The Physics Zone Meeting continued the next day with a few student presentations and a trivia contest co-moderated by yours truly. Said contest wasn't nearly as fun as I'd hoped, and the physics students not nearly as geeky. Usually, I don't overestimate the dorkiness of fellow science majors.

Sunday, various members of our Physics club traveled out to some place in Iowa and learned how to make (some) and set off fireworks. Once the forms come in the mail, I will be certified to handle and fire certain explosives (at least, under certain circumstances). I hope I'll eventually be able to put up some pictures of the various explosions, as some were very unconventional and spectacular.

Comic books, physics, trivia, and blowing stuff up. What more could I have asked for in a weekend?

Well, time for one. It's because of the way Sunday was gobbled up by fireworks that I've been playing homework catch-up all week, and haven't been able to finish any of my blog posts. More forthcoming, though, including the start of Blue Prints!

Where can I get "Mark Wolverton's The Science of Superman" Like yours? Is it a comic or a paperback, etc? And I like your DaVinci-like cover edition. Where can I get that? email me back at NeoMikeTx@yahoo.com Thanks!