In Soviet Russia, Glass Walks on You!

I just slogged through this thread, which I found via Written World. Rather than force you to check it out (not for the faint of stomach), I'll summarize it in an appropriate fashion. One Neanderthal... 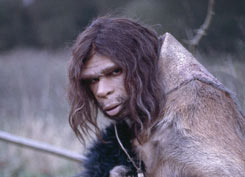 ...started a thread entitled "As a MAN I refuse to..." and filled in his verboten actions:

A veritable tribe of Neanderthals chimed in with their own takes, most agreeing that housework and the purchasing of feminine hygiene products were strictly wooh-mahn doo-tees.
A few Cro-Magnon men... 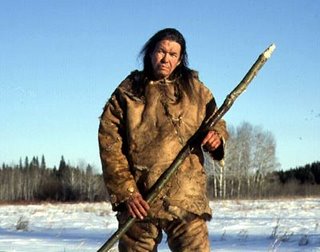 ...joined the conversation. These slightly-more-evolved fellas took umbrage with outright refusals to do housework and buy tampons. After all, they reasoned with their noticeably larger brains, help wooh-mahn, get more nookie-nookie.

As a man there's very few things I won't do. Damn woman holds the keys to the vagina vault!

I love to cook, and I can influence the amount of crazy sex I have by what I cook for my wife. Trust me guys, its well worth it to be helpful.

Sure, these are simple syllogisms, rooted in self-serving carnal urges, but they clearly display the beginnings of what would become humans' much-vaunted ability to draw conclusions from and make predictions through empirical observation. To think that the scientific method has its roots in such a primitive stage of humankind boggles the mind.
As if to remind the world of its existence, some primordial ooze cultures... 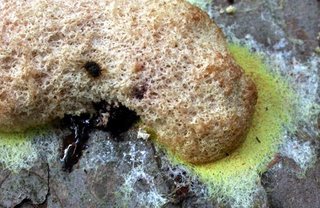 ...popped up to offer the following:

As a man Sunday is football day. Any previous business/conversation must be held off until Monday, or if completely urgent during halftime.

As a man I don't wash dishes, cook, or clean. I do however mow the lawn, fix up things around the house, pick up dog ____, etc. It's a tradeoff.

again, my wife has been having periods, oh, let's say every month for the last sixteen years. she knows when she's running out. she knows that having these things is a "necessity" (otherwise, it wouldn't be so important that i have to drop everything and run to the store). she is the designated grocery shopper. ergo, when she sees these things are running low she should know to go at her next earliest convenience. don't wait until you're out, go NOW. stock up. save us both the agony of arguing over it and/or the actual state of being out.

if it's ever an honest to God tampon emergency, yes i may go. but so far i've got her trained to realize it better by God be one, and it better not happen more than once or twice in my lifetime.
[And when asked to define "tampon emergency"}
i'm talking Biblical...floods, locusts, something of that nature.

And there was one particularly unevolved glob who had this to say (emphasis mine):

What can I say, they have a men's department at the lingerie website I most often visit, whilst perusing things to make my woman wear to pleasure me.

Now, in contrast to this, there were a few (very few) Men... 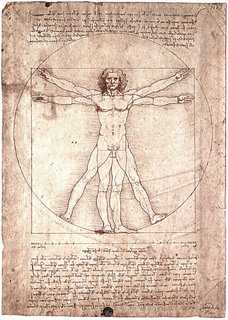 ...who expressed the sort of rationality, compassion, and strength of character that we should expect from tens of thousands of years of evolution and civilization. Things like

As a MAN....I am secure enough in my manhood to have ZERO problems running out to pick up tampons and help my wife out when she's not feeling well. Besides, it's always nice when the girl behind the counter then mentions how she wishes her boy was man enough do that for her. Do you not understand the MONSTER appreciation your girl will shower upon you for something as minor as picking up a box of tampons?!?!?

As a MAN....I'm fully into actually pulling my own weight in the relationship, including doing chores around the house. I'm also smart enough to see that doing so benefits me greatly by keeping my wife from being overwhelmed or stressed out, thereby greatly increasing my chance for sex.

As a MAN....I realize what it actually means to be a man, which happens to not include idiot stereotypes fostered by teenage boys; drunk, overweight ex-high-shool football players; and the people behind MAXIM magazine....

Sadly, these men were met with comments about "buying purses," being "whipped," and having their testicles kept in a drawer, by the less-advanced participants in the thread.

I've already forwarded this thread to the National Science Foundation, figuring that they'll best be able to direct it to the appropriate parties. After all, this overturns some generally-accepted biological and anthropological facts, such as the extinction of Neanderthals and the inability of primordial ooze to use computers. I hesitate to think what this discovery might mean for the evolutionary sciences, and I hope I haven't given the Creationists any fodder.

In the interest of science, I thought I ought to draft my own answer to the question:
As a Man, I refuse to ask or expect my girlfriend to do anything that I wouldn't do in return. I do expect the same courtesy, but it seems to me that "treating other people as you'd like them to treat you" ought to be a given. They should make that a rule across the board, as a matter of fact.
As a Man, I like to cook. I make a mean chili, decent pancakes, good pasta, and any number of chicken dishes. Also, I consider myself a wizard of beef. The number of dishes I can make isn't very large, and I don't cook as often as I should, but I can follow a recipe well, and after the second time or so, things usually come out pretty darn good. I'm always looking to expand my repertoire, so if anyone knows any great recipes, feel free to share.
As a Man, I refuse to let my house get unsanitary. I don't mind clutter; a little clutter is actually kind of comforting. What I can't stand is mold, smells, bugs, and other assorted types of gunk. As a result of this, I actually kind of enjoy cleaning the bathroom (which, incidentally, I've been doing as I write this post). I'd rather clean the bathroom than any other room: it's small, it requires little to no vacuuming, and the results are clear and striking in a short amount of time. Contrast this with picking up a bedroom, where you might work for half an hour with no appreciable change. I'll take bathrooms any day of the week.
As a Man, I recognize that my girlfriend is an individual, and I have no right to control her or make decisions for her. Furthermore, I recognize that our relationship is an equal partnership, and that I ought to consult her about relationship matters. This follows from the first rule.
As a Man, I would buy feminine hygiene products for my girlfriend, if she requested them. I'd probably be a little embarrassed about it, but if I can't take a little embarrassment for the woman I love, then I must not have much of a relationship. I won't buy her clothes of any sort (with the exception of t-shirts, and maybe socks) without her present, because I don't want to get the wrong size or color or something. Now, if she were to give me detailed specifications on some clothing item, I'd gladly pick it up, but I still think it's better if the wearer is present to try stuff on. It's easier than trying to find the time to return things. This follows (less obviously) from the first rule.
As a Man, I recognize that stereotypes are often, if not always, harmful, even when employed as a joke. As a result, I try to avoid stereotyping, I try to judge people individually as fully-developed people, and I recognize that there are only some circumstances in which stereotypes can successfully be used for humor purposes. Newsarama threads, in my estimation, do not count among these circumstances.

Hm...you know, it seems to me that these really aren't Man-specific. I mean, the cooking and cleaning stuff is pretty particular to my own life, but the rest--courtesy, respect, and all that--seems like it should be common sense to any modern human, regardless of gender. It's really a shame that such sense is beyond the reach of our ancestral cousins on the Newsarama board. Perhaps in a few hundred thousand years, they'll catch up to us.

Excellent post, and a good reminder why I tend to stay away from the message boards.

I had kind of an odd situation, sharing a two-bedroom apartment with a woman about my age for a year. She was the fiancee of the guy I'd lived in the apartment with the previous six months, and for three years in the dorms.

We basically split housework, mostly on the basis of what bugged us. I usually took out the trash, and scrubbed the toilet. On the rare occasion there was any dusting, she did that (it never bothered me). We took turns washing dishes (though I'll note she used a lot more dishes than me. I'm big on paper plates myself).

And we got along great. See Neanderthals, it's not THAT hard.

Nothing I add would make this post better. I completly agree with you.
I'm kind of sad for the Neanderthals, though, since they'll get extinct soon because of lack of procreation. And even if they don't, they'll starve for their inability to pick up grocerys

Funny post. The pictures are the finishing touch. :-D

I've never understood why a tiny, but disproportionately loud, group of men go around insulting the rest of their sex in public.

The men I know would consider it insulting if someone implied they didn't have basic survival skills such as cooking or implied they couldn't master the technology involved in a washing machine.

I don't get the post. I get the part about hot wimmin becuz they ROXXX!