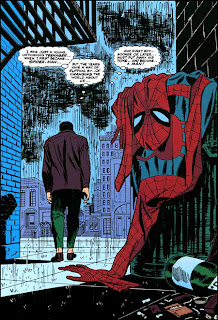 You may have noticed that it's been awhile since I posted anything. I'm so far behind on just about everything here at the blog that it's begun to feel more like work than it should. Two months after the start of Black History Month, and I still haven't finished it. Four months after that string of Bloggiversaries that I never posted for. And how long has it been since I posted anything Monomythic or played with Blue Prints? Or a Friday with Freakazoid? I've always had a problem keeping my promises here at the Fortress of Soliloquy, and if there's one thing that really bugs me, it's breaking my promises. After all, with blogging comes this great power to reach thousands, if not millions, of readers, and we all know what comes with great power. I've shirked my responsibilities enough here, and it's time to put that to an end.

So, with my schoolwork marching forth endlessly and leaving me with far too little time, with my job not paying me nearly enough, and with everything else I have to do on a day to day basis, not only has blogging fallen by the wayside, but comics have too. I have huge piles of floppies stacked up for the last few months which I haven't read, I've got Pride of Baghdad and Fables: 1,001 Nights of Snowfall and three Lucifer trades and about a dozen other graphic novels sitting unread on my shelf. And as I super-glued the cover back onto my brand new copy of Essential Avengers Vol. 1 last night, it occurred to me that comics and blogging have stopped being fun for me. They've become like another job, and that's why I've been procrastinating from them: reading prose, playing video games, hanging out with friends, commenting on other blogs, that sort of thing.

And it's not hard to see why. Spider-Man's angry and emo again (anyone remember Web of Life/Web of Death? There's a reason I stopped buying Spider-Man around then. And it's not just the clones), Captain America's dead (for another month or two), Blue Beetle didn't actually come back to life, Aquaman's changed hands again, Marvel's being led by a fascist (Tony Stark, not Joe Quesada. Then, I would have said dumbass), Thor's returning without his vaguely Elizabethan speech (I don't know why he would have said "thee" and "thou" either, but I liked it) and under the incapable pen of J. Michael Straczynski, Brian K. Vaughan is ending Y: The Last Man and is off Runaways (Alas, poor Yorick, I fear he is not long for this world), Action Philosophers is ending, Superman's chronically late and rehashing plots from the films, Power Girl just became JSA chairman, Checkmate is crossing over with Outsiders (why? I'm not buying Outsiders this time, DC. You suckered me with the Teen Titans crossover, not again), the Justice League is going to spend six issues now picking out a new headquarters (and who else was pissed at the Red Tornado plot's ending? It's like Brad Meltzer said "character progression be damned! Huzzah for the status quo!), Wonder Woman changes creative teams with increasing frequency, and so on, and so on. Nothing's fun anymore, and comics are supposed to be fun, not, as the kids say, suxxors.

So, I'm giving it up. All of it. The blog, the comics, the trades. I'm going to call up my shop and close my account, I'm going to put stuff up on eBay, and I'm going to walk away from all of it for good. It's not that I've run out of things to say, I've just run out of reasons to say them. So, blogohedron, I bid you adieu. I'd like to say I'll be around, but...well, I won't. Instead, I'll just leave you with this:

Please tell me this is some sort of sick April's Fool joke.

Oh poop. Who's going to write all that clever, involved stuff now?

Have you tried BoP? They're fun, I swear!

You had me until you said you were giving up all comics. Good one, Tom, but you got a little greedy. :P

Huh. Well, if it's true and not the most straight-faced April Fool's Joke ever, I'll miss you a great deal. I always checked the blog, even when you weren't posting much. Whenever you did, it was always worth it.

Well... even if it's true, I hope it doesn't curtail your writing on Dubito Ergo Sum. I really enjoy your writing.

Well...maybe I can believe it. Folks do get tired o' bloggin', after all. So, that kind of sucks...

Hey, but then again sometimes they come back again, too! Anyway, if you don't come back...that'll be a shame.