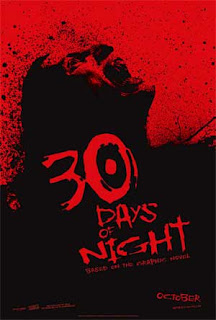 I checked out the film version of "30 Days of Night" a couple of weeks ago. As you might recall, I was rather unimpressed by the source material.

You know, it's so rare and refreshing to see a movie that's actually better than the book it's based on. Especially when it's comic-related. "30 Days of Night" improved on nearly every issue I had with the book. In fact, I think the only problem that remained was the sense of time, that it didn't feel like a month was passing.

Thankfully, though, they really beefed up the character development. That was the biggest thing missing from the graphic novel, and the filmmakers wisely fixed that. Moving the survivors from the vaguely-defined underground furnace to the attic of an abandoned house was a great move, both for clarity and for symbolism's sake.

Cutting out the subplot of the Louisianan photographer was a good move. While it might work for universe-building (no doubt why the comic did that), it took away from the main story in the book.

But the best addition was the feeling of suspense and horror. Giving the vampires their own language of hisses and growls was inspired; it really helped dehumanize them, which coupled with the Ben Templesmith designs, made them far more menacing than they had been in the comic. Giving us several scenes where they appear only in the shadows or on the fringes was a nice touch. That might have been what Templesmith was going for in the original text, but the muddiness of the art and the rushed pace of the story ruined it, if that was indeed the case.

The thing that made me happiest, though, was that they kept the creepy little girl. That was easily the most effective scene in the book, and it worked very well on screen.

Beyond that, the use of gore was well-done, not in the current trend toward overuse and overstatement. Ending the film at the emotional climax (and leaving off the book's epilogue) was another good choice; while the epilogue would have been good for the possibility of a sequel, it would have been bad for the film's impact. Wouldn't mind seeing it as the start of the next "30 Days" flick.

It's fairly well-known at this point that "30 Days of Night" started as a screenplay, and after seeing it in both movie and comic form, I think it shows. It works much better as a film, to the point where I'll be glad to add it to my collection and I'd look forward to a sequel.

Which is quite a pleasant surprise.