Why'd it have to be snakes?

Top o' the mid-afternoon to ye, folks, and a happy St. Paddy's day to all! In honor of ol' Pat, who allegedly drove the snakes out of Ireland, it seems like a perfect time to run through my Top 5 Favorite Snake-Themed Supervillains (and Groups)!

5. Copperhead: DC's resident snake-suited thug; there's not a whole lot to him, really, especially since he got killed by Manhunter early on in her series. He was a nice, generic villain in the Justice League series, and I'd like to see more power-thugs in the DCU. Too many megalomaniacs, not enough people to work for them. 4. The Snake Men: When it became obvious that Skeletor and his minions were a little played out, Mattel decided to come up with a new villainous faction--a third side, against both He-Man and Skeletor. And thus was born the Evil Horde. A few years passed, the Horde became the cartoon villains for She-Ra, and the need for a third faction was felt again. And so we received the Snake Men, a team of ancient villains on a snake theme, who had some cool features and creeped out my mom. Unfortunately, the second coming of the Snake Men (during the second season of the 2002 He-Man series) brought with it this hideous costume, and so they drop down to the fourth slot. 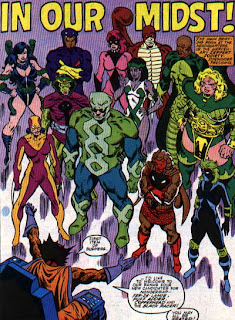 3. The Serpent Society: Marvel's own snake-themed villain organization, where every member has a snake-themed name, costume, and power set. When those supervillains come up with a theme, they really go all-out. I've always liked the Serpent Society, who sadly seem to be a little too fun for most of Marvel these days. I'd love to do a comic with the Serpent Society, or several, because it seems like there's just a lot of material to mine there. The membership roster is extensive and the powers and costumes are pretty well awesome, so just check out your nearest Official Handbook of the Marvel Universe. 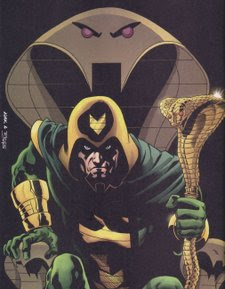 2. Kobra: Followers of the Kali Yuga, Kobra is DC's ultra-versatile international cult-slash-terrorist organization. Need a megalomaniacal supervillain group to battle the Flash? Kobra. Need a decentralized terrorist organization to be a foil for Checkmate? Kobra. Need a convenient analogy for religious fanaticism? Kobra. Just need a bunch of nameless henchmen in matching themed costumes? Hydra--er, Kobra. Kobra is plot panacea; they can fit anywhere, they aren't particularly tied to any one hero, and they can make just about any point. 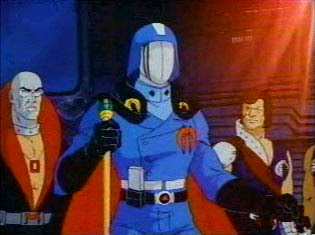 1. Cobra: Sure, they're often only marginally snake-themed, often limited just to vehicles and shock troops, but they're easily the most recognizable, most insanely fantastic group on this list. You almost have to admire a terrorist organization who manage to hold such lofty ideals (world domination, natch) with such a terrible track record. Every aimless laser battle and attempt to hypnotize people with an evil rock band manages to end with Cobra Commander shouting "retreat! Retreat!" but the group keeps on truckin'. After all, when life gives you lemons, you make a new leader using the genetic material of the most ruthless military leaders in history. Sunrise, sunset.

So, when you're out drinking your green beer tonight, raise a glass in tribute to terrorism's little engine that can't, Cobra.

And may we never speak of Cobra-La.

Aw, I MISS Cobra. Tomax and Xamot were just the ginchiest.

Actually, the Horde figures came out right at the time of the Secret of the Sword movie. Even though Mattel wanted the Horde as He-Man villains (as in all the mini comics) Filmation made them She-Ra villains right from the start. This didn't occur a few years after the toys were released. This was all at once.

You're right, it was a matter of months (maybe), not years. My bad.