The DC Source Blog recently revealed some pages from the upcoming J. Michael Straczynski/Shane Davis OGN "Superman: Earth One." The story is another retelling of the Superman origin, and it's clear that they're building on themes that have become popular in recent versions. I'm thinking most specifically of how Mark Waid's "Birthright" gave Clark inhumanly blue eyes that betrayed his alien heritage, but were masked and dulled by his glasses, justifying their presence. Davis has gone a step further: 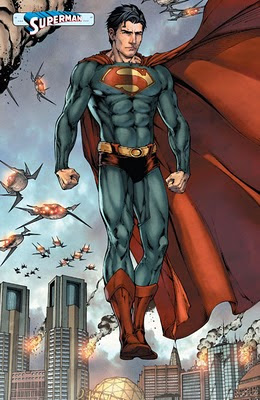 Yes, it's going to be a struggle for Superman to hide his true identity, given his disproportionately large head and stumpy upper legs, but when he slicks his hair back and slouches, no one will no the difference!
Posted by Tom Foss at 12:39 AM

Well, who ever said there are no Kryptonian little people?