I can't believe I didn't see this before

Okay, so Montoya and Question have tracked down Intergang to Khandaq, where they discover Whisper A'Daire leading a bunch of animal men. Animal men similar to the ones who are kidnapping the mad scientists and taking them to Oolong Island. Isis, who is clearly somehow connected to Intergang, and her brother Osiris, are named after gods from a culture who worshiped people with animal heads. Ralph Dibny was sent on his journey into the land of magic and make-believe by a sort of "animal-man," Detective Chimp, while the actual Animal Man accompanies Starfire, Adam Strange, and Lobo in their trek across the universe. At least one of Luthor's Infinity, Inc. is a sort of animal-man.

Meanwhile, look at all the robots. You've got the fusion of Mal Duncan with Red Tornado's voice box, the rebuilt Red Tornado in Australia, the Metal Men and faux-Metal-Men, evil Skeets, the Island of Misfit Scientists and all their robotic toys, and the distinct possibility that Supernova is a Superman robot. It's all so obvious.

Clearly, the robots have gone rogue (the robot rebellion mentioned in LSH), and have teamed up with the animal-men to take over the world, nay, the universe! And there's only one person devious enough, cunning enough, evil enough, to pull off such a dastardly, intricate plan. And that person is... 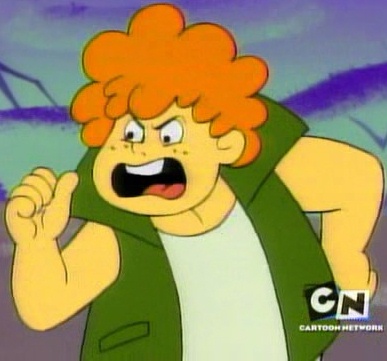 ...Red Herring!
It was staring me in the face all along! Well, that's it folks. Sorry if I spoiled 52 for you. I mean, if they wanted to keep this mystery going the whole year, they really should have made it less obvious.

Actually, it's just that the furries have finally infiltrated mainstream superhero comics.

Yes, but how do the Greys and the Shape-Shifting Lizardmen fit into all this?

Not only that; look at JLA where Red Tornado's robot body gets powered up with Vixen's Tantu Totem!

The problem here is, if you're wrong, Red will probably wrap a bicycle around your head.

And then sue you for defamation of character (hey it's New Earth. The rules are different now).

Ah, yes, Red Herring. It's all so clear now.

I believe there were rumors he's also going to turn out to be the mastermind behind the Civil War storyline, isn't he?