All right, Bat-Fans. We're all aware of Batman's seemingly infinite bat-arsenal of bat-shaped and bat-adorned bat-gadgets for every bat-occasion. So, of all these myriad devices, which one's your favorite?

For me, the choice was tough, but I ultimately decided to go simple yet obscure. In the Animated Series, Batman had two major types of Batarang--the classic version, and ones that appeared to be razor-sharp, and shaped more like shuriken: 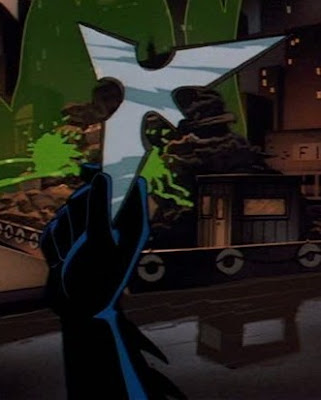 The DCAU wiki calls these "Bat Stars," which is as good a name as any. I've always really liked the look of them, and they're a nice alternative to the more traditional Batarang.

So what's your favorite bat-gadget?
Posted by Tom Foss at 9:34 PM

Man, he had a lot of cool gadgets in BTAS. I liked the grappling hook thing he had, since it didn't require to throw his lines to swing, and he could even send an electric charge down the cable (I remember he used it to blow the door off a wrecked car one time).

The often never mentioned lenses in his cowl... allowing for night vision and infrared vision as well.

Or those giant batarang-swords he breaks out in JLU to fight robots...

I think I like the "bat stars," too, alongside the grapple gun.

Of course, one of the other obvious choices for gadgetry is the Batmobile. My dad's particularly fond of the "Tumbler" Batmobile from the reboot.