Ladies and gentlemen, meet the Batjet: 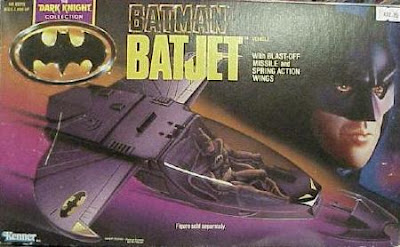 Released in 1990 as part of Kenner's toyline tying into the 1989 Batman movie, the Batjet sported spring-loaded pop-out wings and a launching Bat-shaped nosecone/missile. It was a pretty cool vehicle, all things considered, but it didn't bear much resemblance to anything Batman used in the movie. It's worth mentioning that it was also made by Kenner, who were notorious for reusing molds (to the point where the Robin Hood figure from the "Prince of Thieves" line has a "G" on his belt...because he used to be a Super Powers Green Arrow figure). So it's not entirely surprising to find: 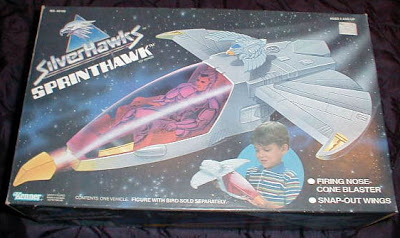 The Sprint Hawk--which, contrary to the box art, was primarily Quicksilver's ship. Released in 1987, the Sprint Hawk features spring-loaded pop-out wings and a launching beak-shaped nosecone/missile. It even sports a perch on top for one of the SilverHawks' companion birds to hitch a ride!

I'm not sure why Batman's Batjet has a perch on top. Maybe it's cheaper than putting another seat in for Robin. Hang on tight, chum!
Posted by Tom Foss at 8:09 PM

Actually your comment about Robin Hood reminds me of my favorite toy from that movie (which even as a 12 year old I recognized as BS).

Doesn't suprise me at all to see a Batman/Silverhawks clone.

You know, I had that Costner Robin Hood figure. I remember thinking that it didn't look anything like him, but I didn't notice the G. I should see if I can find it next time I'm at my parents' house.