"Escape is impossible until one perceives all of the barriers." 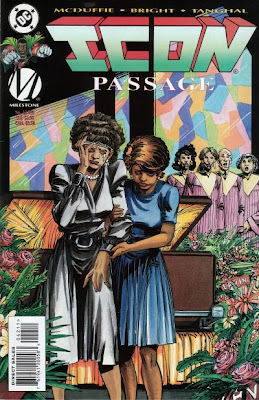 Dwayne McDuffie has died and the worlds of comics and animation are less as a result.

McDuffie was one of the best. He was the mastermind behind Milestone Comics, an incredibly underrated imprint that has given us quite a lot of interesting characters and poignant stories. He was a key component of the awesomeness of the DCAU shows, and I think he understands the core DC characters better than most.

And I think he may have been too good for DC. At the very least, he deserved better than what DC gave him. Milestone as an imprint was shuttered with several finished issues still to be printed, issues that would have provided closure to their respective titles. When DC finally had the sense to hand him what ought to have been their flagship title, "Justice League of America," they tied him up in so many editorial mandates and crossovers that the book was never able to find its feet. When DC integrated the Milestone Universe characters into the DCU proper, the early hype of how much would be done with them eventually petered out into a few appearances in Brave and the Bold and JLofA, and Static joining Teen Titans (apparently the only Milestone character DC actually cared about). As if to add insult to injury, DC censored McDuffie's "Milestone Forever" for unknown reasons.

And all the while he kept working on DC's characters, in one form or another, putting out some of the best stories ever told with them. I haven't been able to watch "All-Star Superman" yet, but after "Crisis on Two Earths," I think it's clear that McDuffie is one of the few people who could faithfully and excellently translate a Grant Morrison/Frank Quitely epic into a screenplay.

And now, he's gone. I wish his family and friends the deepest of condolences, and I hope that, perhaps, DC will finally do right by his characters even if they didn't do right by the man.
Posted by Tom Foss at 8:45 PM