I was pretty harsh on Chris Roberson's first issue of Superman, mainly due to a fairly glaring error. I also have a history of getting quite annoyed when comics mangle basic science in the service of technobabble. There's an art to technobabble, and it's clear that not every writer is the staff of "Star Trek: The Next Generation."

So it's always nice to be able to praise writers when they get it right. And in "Superman/Batman" #80, Chris Roberson got it right.

Frankly, it started with some excellent time travel action in the DC One Million future in #79. I'm a big fan of DC's various futures, especially that one, and I'm similarly a big fan of stories that play around with time travel, so this hits a lot of nice notes for me. I do wish post-DC One Million uses of the 853rd Century characters would recall that their outfits have lens flares associated with them; every damn character commented on the strange fabric of the heroes' outfits in the original crossover, and it's not like lens flare is difficult to add.

But I digress. The point is, the first part of the story is strong, but it's the second part that really makes me happy. 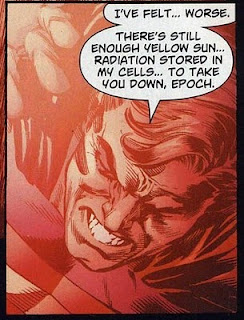 So I'm elated to see Roberson getting that precisely right on this page. Epoch fires red sun energy at him with such intensity that it would cause Superman to burn off yellow sun energy (since invulnerability uses that energy like any of his other powers) while being unable to replenish it. As Superman explains, the attack still left enough yellow sun radiation in his cells that he would have his abilities. It's a small, simple detail, but it's still nice to see.

The real treat, however, comes when Superman, Batman, and Robin are locked in Epoch's "Omega Barrier," a cubic force-field with a barrier "as impenetrable as the event horizon of a black hole." First, there's this excellent bit of characterization: 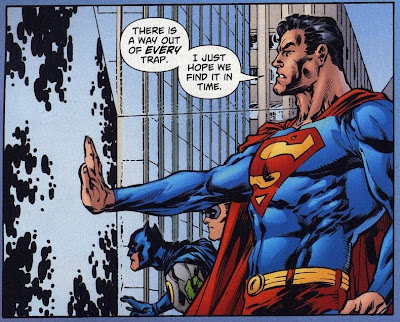 Maybe it's just me, but that seems like a pitch-perfect Superman line. And the way out of a trap that's as inescapable as a black hole is the same way that energy and information escape from a black hole. As Superman correctly explains, even a vacuum is constantly churning with the creation and annihilation of virtual particle-antiparticle pairs. Normally these quantum fluctuations average out to nearly zero energy, but at the event horizon of a black hole, every so often pair creation causes one particle to appear outside of the black hole's range, and the other to appear within that range, causing one particle to fall into the black hole and the other to escape. The net effect is that energy leaks out of a black hole as Hawking Radiation, and over time that would cause the black hole itself to evaporate.

So Superman focuses his heat vision on the Omega Barrier's wall, hoping to increase the rate of particle-antiparticle pair production, and thus create a buildup of Hawking Radiation, which ultimately knocks Epoch out of the sky and disintegrates the barrier. It's a very clever solution, and any scientific quibbles I might have are minor at best (and at least one of them evaporates faster than a black hole if Hawking Radiation is understood in a context of quantum tunneling). It's an excellent example of how real scientific concepts can be tweaked into interesting superheroics without losing the integrity of the science.

So kudos to Chris Roberson. More than anything else, this issue has me excited to see what he does next with the Man of Steel, and based on this two-parter, I hope he stays on the book beyond the conclusion of "Grounded." Because it looks like he's capable of a lot more than batting cleanup for Straczynski.
Posted by Tom Foss at 8:35 PM