Today, we're continuing our look at George Lowther's 1942 novel, The Adventures of Superman. When we left off, Eben Kent was about to enter an anvil-lifting contest against much younger men in hopes of saving the farm, and I'm pretty sure someone asked "what could possibly go wrong?" along the way.

The day of the State Fair dawned bright and clear, but there was little happiness in Clark Kent's heart. (p. 36)

Reading this, I can't help but think of "Casey at the Bat"--'but there is no joy in Smallville,' or something like that. Clark didn't sleep well, worried about his father, and trying to think of a way he could help. I get that Clark doesn't realize that he's super-strong yet, but why doesn't he consider entering the contest himself? He's a young man, and while he may not have the years of experience and exercise that Eben has, I'd think being a young, hard-working farm boy would count for something in the muscle department.

Eben and Clark head out to the Fair Grounds after a hearty breakfast1, while Sarah stays at home. The hard times, it seems, have been harder on her than on Eben, aging her more obviously than him. The fair is an interesting sight to me, because aside from a couple of details ("horse-shoe contests, potato-sack races") it sounds like every local and state fair I've ever been to. Sixty-plus years later, and some things still don't change (p. 37).

The afternoon approaches, bringing with it the anvil-lifting contest. "Clark's eyes roved over the crowd, sought and found what he most feared--the faces of 'The Bull' and Fred Hornbach" (p. 38). The competition for the contest is stiff, and both Clark and Eben know it. "The old man realized, perhaps for the first time, the impossibility of his winning against such heavy odds" (p. 38). But Eben goes anyway, refusing to back down when he's already committed to the contest, and knowing how much they need the prize money. Willingness to strive against insurmountable odds in the name of responsibility and a greater good? In the education world, we call what Pa is doing here "modeling."

I'd like to step back once more and mention just how much I love the Kents. Orphans are the lifeblood of superhero comics, and Superman's no exception to that, but he's one of the few for whom that orphaning isn't his motivation for being a hero. Batman is driven by the tragedy of his parents' deaths, Spider-Man became a hero out of guilt over Uncle Ben, but Superman becomes a hero because he was raised by his parents to be one. The loss of his parents, even his adopted parents, plays a fairly minor role in his superhero career. He becomes a hero because it's the right thing to do.

In part, this is because in the origin stories where one or both of the Kents die, they aren't killed in some freak accident or mugging or anything. They generally die of old age, or related symptoms. The Internet's Leading Batmanologist argues that Bruce Wayne should be the happiest kid ever, and that his parents' death shouldn't be his fault, because that's the point of the story. Similarly, I think the stories where Clark inadvertently causes his parents' deaths (like in the Silver Age, where he accidentally infects them with pirate germs, or something) or where they die from some less natural cause (as in the modern age, where Pa overexerts himself during a battle with Brainiac) are missing a big part of the point. If Ma and/or Pa must die, it should be from old age-related symptoms; it should be tragic in the way that all loved ones' deaths are tragic, but it shouldn't be an event, if that makes any sense. The death of the Kents should be a reminder to Superman of his limitations, that no matter what he does, no matter how much power he has, he can't save everyone.

But I think, ideally, that Superman's parents ought to be alive. There's no reason that Clark's parents have to die, and if there's any superhero who should be able to go back home for Thanksgiving, any hero who should have a good relationship with his parents, it's Superman. The whole point of Superman isn't just that he's the ultimate immigrant, it's that he's the ultimate adoption story. He's an orphan, sure, but he's been adopted by the entire planet, and he sees himself as just another member of the family. And that's all because he had some solid parenting from good, kind, upstanding people. Which is why it's always nice to see Clark's parents walking the walk, and modeling for Clark what real heroes do.

Digression over, back to the book. Clark looks to the competition, seeing how obviously strong they are, and knowing that even his youthful muscles couldn't measure up. Eben ascends the stage, while onlookers snicker, not knowing the desperation that led him to this contest. Clark overhears a sour-faced aging city-slicker scoff aloud about Eben's foolishness, and the two exchange bitter glances. Afterward, the contest begins.

The first man to try is one who stepped up after Eben, and he's unable to get the anvil to budge in the slightest. Next is Fred Hornbach, who struggled to lift the anvil a full inch off the platform. "The Bull," a big broad shirtless man, took to the challenge like a smug prizefighter, and lifted the anvil three inches. Finally, Eben took his turn, much to the crowd's derision. The crowd goes silent when Eben manages to lift the anvil, but at two inches, it's obvious how much he's straining. Clark cries out: "Put it down, Dad! You'll never make it! You'll kill yourself!" (p. 43). The shout is in vain; Eben feels a sharp pang of pain and drops the anvil, but puts on a brave face even as the crowd jeers once more. "The Bull" joins in the mocking, until finally Clark loses his temper. He rushes the stage.

He stood before "The Bull" with tears of rage streaming down his cheeks.

"Let my father alone!" he shouted. "Let him alone--you hear?"

"The Bull" looked at him in mild astonishment and amusement. He reached out a powerful arm to push Clark away.

He never finished what he started to say. As his hand reached out for Clark, the boy stepped aside and swung his fist against the other's jaw. "The Bull" shuddered and sank limply to the floor. (p. 44)

There's a trend in certain Superman origin stories that portrays the young Clark as having a temper; he's not quick to anger, necessarily, but he's shown to have a limit and a righteous fury when that limit is hit. We're seeing that here, and I've seen it pop up in Tom De Haven's "It's Superman" and "Smallville" as well. I really like this trait, because it's so believable. It's a flaw in Clark's character, a sign of his immaturity, but it also presages those rare occasions when we see Superman lose his temper--I'm specifically thinking when he fights Darkseid in "Justice League Unlimited" or when he comes out of the Black Mercy world in "For the Man Who Has Everything." It's very humanizing. It's also, when Clark is young, an opportunity for him to realize precisely why he can't cut loose all the time, and why patience and restraint are more important for him than almost any other person alive. 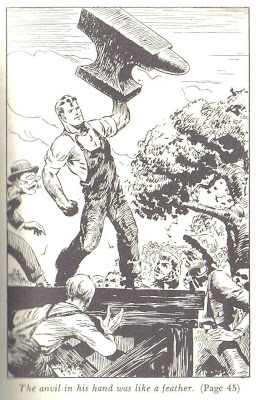 Still seething, Clark walks to the anvil, indignant about the crowd's treatment of his father. "He reached down, gripped the anvil in both hands, and lifted. He was almost thrown off balance at the ease with which he raised it and held it aloft, high above his head!" (p. 45). The crowd is silent in awe, and Clark finally cools down enough to realize what he's done, and moreover, that the anvil feels practically weightless. He puts the anvil back down, and the crows cheers. They mob Clark, asking him questions (again, I can't help but think that John Byrne read this book), until the sour-faced city-slicker pushes through to say that he works for the Daily Planet and wants to write the story of his remarkable strength. Clark is overwhelmed, unable to speak, so the reporter decides to write the story without Clark's help. But as a show of gratitude, he tells the boy to look him up if he ever needs anything. The reporter turns to leave, but Clark manages to stop him and ask his name.

"Eh?" He paused, squinting back at the boy. "Oh yes. Couldn't very well find me without knowing my name, could you? Well, son, if you ever come to the Daily Planet just ask fro Perry White. That's all. Just Perry White!"

And much as I'd like to finish this book tonight, I think that's a good place to stop. Next week, we'll tackle the last two origin chapters, and then it's on to other media once again.


1. No doubt one that included Kellogg's Pep, the Sunshine Cereal!2

2. If you don't get that joke, don't worry. I'll do some explanations soon.