Jason Rusch has fought an uphill battle. I mean, no one wanted a new Firestorm. Ronnie Raymond had just been brought back into the limelight through the Joe Kelly JLA when he got unceremoniously dispatched in the oft-maligned Identity Crisis. Jason pops onto the scene with a new series, a familiar name, some unfamiliar twists on his powers, and all of fandom against him.

He hasn't fared much better on the production side, either. His first writer brought back Ronnie Raymond in the old Prof. Stein role, then killed him off again, for reals. The second writer revamped the supporting cast, gave Jason a new venue, brought back Prof. Stein, and really ramped things up...until Infinite Crisis caused the book to stagnate a little. Right before the OYL gap, things started looking really good, but things slowed down again shortly after (those last few issues, though? Wow). Now, Dwayne McDuffie's taking over for a final arc, with the promise that Jason will pop up in a team book afterward. The title's been through more artists than you can shake a stick at, and nothing seems to have raised its popularity.

Which is really too bad, because Jason's a fantastic character. He started out with little income, an abusive father, and little understanding of his amazing new powers. He was naïve, inexperienced, and prone to mistakes. He was a good kid, but he wasn't a born hero. He was a scared, troubled kid trying to do the best he could, and wearing a pair of boots that were far too big. He's gotten significantly better since those early days, and the guidance of Prof. Stein and Firebird has contributed to that quite a bit. These days, he's a little more comfortable, a little more confident, and a little more joyful. 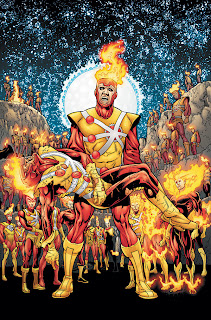 Part of the character's strength has been one of the books' weaknesses. We've seen Jason deal with a lot of things all at once. It seems like every arc is burdened with about a dozen subplots, from tension between Jason and his artificially-aged teleporting clone girlfriend to trying to find Professor Stein to trying to juggle Jason and Lorraine's lives while also being active as Firestorm to Jason's issues with his dad, his mom, his school, and his job. All this tension is great for character development, not so much for readability.

Jason Rusch is a good character. He's not Superman, he just tries to do the right thing with the power he has. He's been burdened with a legacy he never wanted, expectations based on a character with years of experience, legions of angry and apathetic comic fans, and an unstable creative team. It's sad to see his book end, just as it's getting to a place where all the characters have finally found their respective niches, but I know that wherever he lands, he'll make the most of it.

I've been trying to end these posts with a short summary of the character or brief powerful words of praise. For Jason, though, I feel something different is necessary: I bought this Firestorm series to see what happened to Ronnie Raymond. I stuck with it out of habit and hope to see Ronnie again. I never thought I'd like Jason, and I certainly didn't give him much of a chance at the beginning. For that, I apologize, because Jason deserved a first chance.

Yet, even without it, he won me over. Good luck, Firestorm. May you land on your feet. 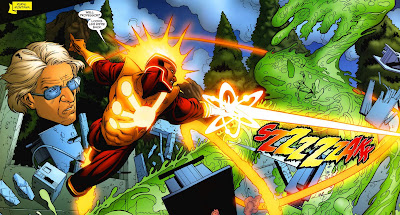 There is at least one website that attempts to catalogues cover homages, particularly those relating to Crisis on Infinite Earths. It has quite a few entries but, like you, I'm still searching for a more extensive collection.