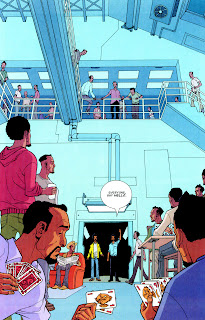 Well, I suppose that would be more accurate as "was" freakin' awesome. But you know how those dimension-hopping genius supervillains are, always coming back from the dead as clones or alternate universe counterparts or whatever. If I know anything about Kirkman, and I don't, then Levy will show up again at some point.

In case you're one of the three people who doesn't read Invincible, let me lay it out for you: Angstrom Levy was a pretty normal guy, who also happened to have the power to travel between alternate dimensions. He wasn't a bad guy; in at least one world he was even a member of the Guardians of the Globe. He commissioned the Mauler twins to build a machine that would transfer the memories of thousands of his alternate universe counterparts into his brain, so that he could travel between the alternate universes more safely. Invincible interrupted the process and fought the Maulers, and hundreds of alternate universe Maulers, but Levy told them not to kill the young hero, because he didn't want his blood on his hands. When the battle started going sour, Levy got up to intervene, taking off the apparatus's helmet. This triggered a huge explosion which apparently killed most of the Maulers, and left Levy a freak with brain matter growing down his back. He remembered giving the order to kill Invincible, and recalled the teen damaging the equipment, thus causing the accident. And so, Levy swore to take his revenge on Invincible for turning him into a monster.

It's a classic origin story, with the twist that he didn't suffer from any pathologies or obvious flaws before entering into his experiment (unlike certain vain European doctoral students and proud scarlet-coiffed mad scientists). I'm not entirely sure how Kirkman does it, but he manages to take these very classic comic book elements, whether it's Invincible's Peter Parker-esque attitude or the JLA-like heroes of the Guardians of the Globe or the origin stories of the villains, and makes them feel new and fresh and fun. It's really the greatest strength of the book.

Of course, Levy jumped ship to a more advanced universe, hoping they could cure his condition. They enhanced his strength and gave him a snazzy academic vest ensemble, but couldn't do anything about his bulging gray matter. So, of course, he moved the whole "revenge" plan forward. He found Invincible's mom and baby half-brother, held them hostage, and toyed with the superhero by tossing him through dimension after dimension (including the Marvel universe!) to soften him up. With his mother threatened, Invincible snaps, attacks Levy, and fights him across the multiverse until he beats him into a bloody smear on a desert world, having overestimated Angstrom's strength and durability.

Angstrom Levy was charming, intelligent, and chillingly evil, and I suspect that Invincible's guilt over killing him in a fit of rage will be a recurring theme for some time.

Right up until another brain-backed Angstrom Levy pops out of an interdimensional portal, with a dozen Invinci-kills under his belt and looking for number 13... 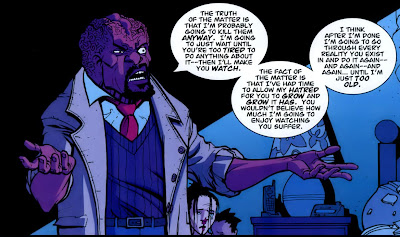