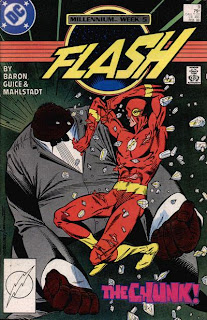 Chyre and Morillo are all right. I mean, they're decent enough characters. And Pied Piper was great, even when he was vaguely evil (or something) after that whole Top storyline. But my favorite Flash cast member, from the first time I read about him, is Chunk.

Chester P. Runk was a genius physicist who developed a matter transporter, which imploded and became a part of his body. He became a living black hole, capable of sucking matter into another dimension. After a couple of bizarre tussles with Wally West, the two became friends.

I've only read a handful of issues with Chunk, including the Geoff Johns story where the black hole inside him threatens to devour all of Keystone. It was a nice way to bring back a long-lost cast member, and to show all the fans that he's doing quite well for himself.

I really don't have much to say about Chunk. I mean, it's no secret that I love superpowered physicists, and I love the Flash and his supporting cast. Combining the two can only lead to success. Hmmm...hey, Marc Guggenheim, I have the perfect cast member for you! His sheer awesomeness might be just enough to pull that book out of the gutter!

I mean, even a living black hole can't suck as much as the last seven issues. 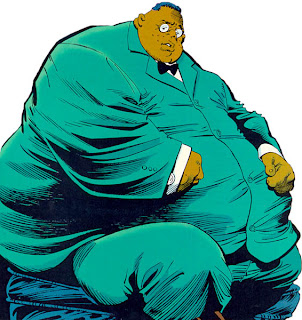 Did you read the Flash annual, where Wally and Chunk decide to join the JLI and basically beat up a half-nekkid Guy Gardner for the whole story. Hilarious!