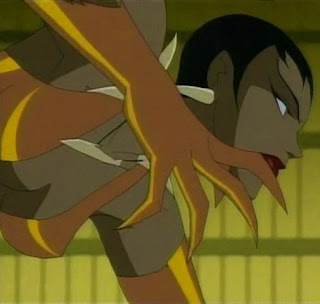 I know where you think this is going. "No, I first encountered Vixen in Justice League Unlimited, where she was John Stewart's rebound girl after Shayera left. This put Vixen at an immediate disadvantage; the viewers wanted John to be with Shayera, they were supposed to be together, and Vixen was standing in the way of that. She was a usurper; she could have been a cop-out character. But instead she was a strong, likable character; in a lot of ways, she was more likable than Shayera. She certainly wasn't as abrasive or combative, and she had this calm, effortless elegance about her. You got the feeling that she could be in pitched battle with Kalibak, and when it was all said and done, she wouldn't have a hair out of place. It's not that she'd be worried or concerned about such a shallow thing, just that when she was the only one left standing, she'd still look pristine. We wanted her to be the "bad guy," the "other woman," the vicious harpy who stole John away from his true love. But instead, she was a nice, normal, charming person, and we could all see what John saw in her. She won us over, and it takes a strong character to do that."

But that's not at all what I'm going to say. No, in fact, I first found Vixen in the pages of Grant Morrison's Animal Man. And like every guest star in that book (with the possible exception of Freedom Beast, but that's a post for another day), I thought she was fantastic. Moore's Swamp Thing drew connections between DC's magical and horror characters, Gaiman's Sandman had a way of uniting the DCU's different mythological and religious elements, and Morrison's Animal Man united the animalistic elements. Vixen was basically co-headliner for several issues. She was a stark contrast against Buddy Baker. Vixen was more confident, more competent, and more practical than the book's star. 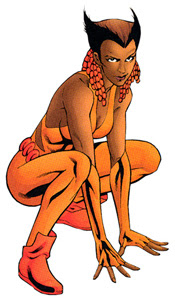 In a very real way, she was the "comic book" counterpart to Buddy. Animal Man was a fairly normal guy with a normal family. He wore a jacket over his costume so he could carry things; he drew his powers from a Sheldrakian newage morphogenetic field. He fumbles in battle, often stumbling on something that works rather than following through on a plan or engaging in clever banter. On the other hand, Vixen is a supermodel with a perfect body, who wears little more than a spandex superhero outfit, is great in battle, and derives her abilities from an ancient magical artifact. Mari has essentially the same powers as Buddy, but her appearance, her attitude, and her power source all adhere to more traditional comic book conventions.

Having set up the dichotomy of character, Morrison puts them into separate simultaneous situations. While Buddy's busy dealing with the weird yellow metafiction aliens, Vixen is locked in combat with a doppelganger of sorts. She is repeatedly injured in ways that ought to kill her, but heals immediately and continues to fight, without any fanfare whatsoever. The point of the juxtaposition is clearly to make a statement about traditional superhero comics, and about how Animal Man diverts from and subverts those conventions (and it foreshadows Buddy's meeting with Grant at the end of the arc, where he also fights a transparent doppelganger as an example of traditional comics storytelling). Superhero comics, Morrison seems to say, are all about endless battle without consequence. The heroes and villains are based on a black-and-white view of the world; the characters operate on a formula--one pure, flawless hero, one villain who is a corrupted version of that hero. The battle never addresses any real issues, except symbolically. Meanwhile, Buddy is a normal guy; when he's injured, or when his family dies, it has a real effect on him. When his history is rewritten on the fly, it has a major effect on his life. He assaults social and ecological issues more often than megalomaniacal supervillains. He's not your average superhero, and maybe the average superhero shouldn't be either.

Then again, Vixen's not exactly the "average superhero" either. Sure, compared to Buddy she's a lot more traditional, but that doesn't make her Captain Cliché. She's a firebrand, she's strong and independent, and hopefully when Brad Meltzer stops writing her, she won't look like an idiot who has to announce what powers she's using.

According to a variety of websites, she's also DC's first black superheroine. They got themselves off to a very good start. 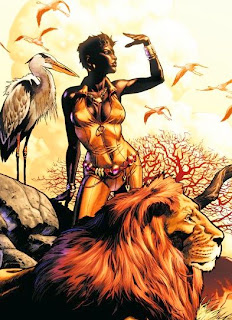 JLU was the first time Vixen really interested me on a pure super-heroic action level. On the comics page, she's kind of a bland super-hero compared to other more flashy characters. "Elephant strength" with a vague elephant illustration doesn't look too impressive, but when that concept is well animated, it looks really cool!

Then I guess I'll eventually love her even more.

ah, i meant not having read justice league detroit is essential. it can only sully ... well, everything you hold dear. even cocoa pebbles and cool summer breezes.

Kind of went into a digression into Animal Man there.

buttler: I see. I really don't want to lose my love for Cocoa Puffs (I do go cuckoo for them)...maybe I should rethink my eventual reading of Detroit JLA. Or maybe I'll just do it in spurts, behind lead glass, or something.

Matthew: As with my "cop-out character" digression in the first post, it's part of an attempt to keep these posts feeling fresh. I could go on and on about how awesome each character is, but that would get tedious, and tedium would be a disservice to these characters. So, I'm trying to change things up a bit with each one. Showing how Morrison used Vixen to make a point about superhero comics and Animal Man doesn't seem like it's too far off topic to me.

The platypus in me likes Vixen, but the aardvark isn't so sure.

I like Vixen, and I think the character has potential if written correctly.