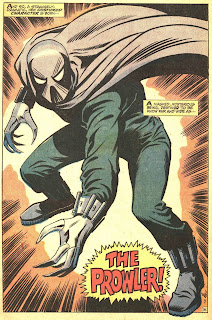 It's not hard to make a case for implicit racism in the character of Hobie Brown. I mean, you have a black man who merges technological prowess and a job as a window washer into a career as a costumed cat burglar called The Prowler. I mean, "The Prowler"? It practically screams "white fear." And if someone were to know only Hobie's race and alter ego, they might come to the conclusion that he was perhaps a step above Ebony White.

Thankfully, when we judge Hobie by the content of his character, we find someone significantly more admirable. Like 95% of comic book scientists, Hobie Brown's inventive genius went unappreciated. To support himself, he worked as a window washer, and used his skills to design and invent several items which would make the dangerous job easier. Of course, his boss wasn't interested, and eventually he was fired for daydreaming on the job. Angry and frustrated, he adapted his equipment into the perfect set of tools to become a costumed supervillain, and decided to rob the Daily Bugle to prove his worth and support himself.

Of course, robbing the building where a superhero works isn't quite as easy as it sounds, and Peter Parker caught the Prowler in the act. During the ensuing scuffle, Pete got knocked out the window, and while he was able to use his powers to save himself, Hobie was convinced he'd accidentally killed the young photographer. Feeling guilty and hoping to redeem himself, the Prowler lured Spider-Man into a trap, hoping to defeat him. Of course, Spider-Man won, but realized after hearing his story that Hobie was a good kid, and a lot like himself. He hung up the Prowler costume, and when he put it back on, it was as a hero. 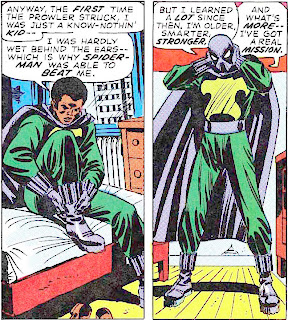 I first encountered the Prowler in Amazing Spider-Man #365, a comic I've mentioned at least once before. Like the other stories in that extra-sized issue, I read the hell out of the Prowler back-up, and I loved the character. I'm not entirely sure what drew me to him, but I know that I can find dozens of Prowler drawings in my old sketchbooks. He's only had a handful of appearances, including a bout with paralysis back in '96. Like so many powerless costumed vigilantes, he got better, though to my knowledge he hasn't donned the old green-and-purple since.

The Prowler's kind of a mishmash of comic book clichés turned on their heads. He's a hero, but he wears a costume colored in the villains' palette. He was an underappreciated scientist who didn't ultimately use himself in some crazy experiment. He was frustrated, proud, and a little vain, but didn't ultimately become a supervillain. He had all the normal troubles, sure, but by the time I knew him, he was also happily married. Hobie Brown's a pretty unconventional hero.

Why he hasn't been seen in years is beyond me. He'd be the perfect character for Peter to double-date with. He'd be the perfect character to consult with all those technological quandaries that Peter occasionally finds himself in. He's an interesting married superhero with a brilliant mind for technology...he and Spidey ought to hang out regularly.

Maybe when all the Civil War dust settles, when Peter is in need of a few friends, he'll look up our dear Mr. Brown, and the Prowler will stalk the New York skyline once more. 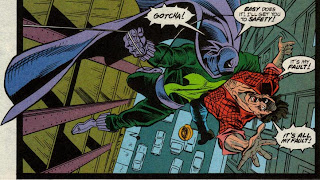 Well Hobie did show up in the Ms. marvel Civil War crossover (#6 I believe), but it was mostly so she could kick his butt, he could ge thrown in jail, and the feds could threaten to toss his wife in their too, if he didn't confirm that the second Spider-Woman was a traitor to the Pro-Reg cause.

But, hopefully, he got busted out by Cap, and he can get some payback.

There's an Spider-Man arc where Prowler is recruited Sandman along with several of Spidey's other reformed villians to try and save him from something. I think they end up fighting the Avengers or something. It was the 90s so who knows...

I remember Hobie VERY well - he was in some ways even MORE the "Superhero Who's One of Us" than Spidey! He had no superpowers except his inventing skill and (after his initial slipup into crime) a desire to Do the Right Thing, and all the authority figures around him NEVER understood him - why WASN'T he a regular character? He was also the first black character in a comic this whiteboy, at least, could seriously relate to.

Also, I thought I'd come over and ask, since you're doing a Black History Month on superheroes, that you do something w/Frozone - who's one of the better-written black superheroes, IMHO,

The reason you may have not seen the Prowler as of late is possibly due to the fact that Todd Mcfarlane was the penciler on these issues. And if you actually look at the character it is without a doubt the first drawn apperance of Todds early vision of Spawn! And if you doubt my words just get the pics from spawn #1 and compare to the pics of the prowler. But here are a few examples, the cape,the mask,the footwear so check it out and post your thought on my reply.

I'm not sure which "those issues" you're referring to...Prowler debuted in 1969 under artist John Buscema, and his costume was designed by John Romita, Jr. The other issue I took an image from was a feature in Amazing Spider-Man #365, drawn by Tod Smith. In fact, as near as I can find out, McFarlane has only ever drawn Prowler twice, in ASM #304-5.

I certainly don't deny that Spawn has a lot of Hobie in him; Spawn's costume (especially early on) was basically a patchwork of Marvel heroes (kind of like Youngblood)--Spidey's black costume, Dr. Strange's cape, Punisher's skulls, Ghost Rider's chains, etc.

And Marvel later repaid the favor by creating Nightwatch.

In any case, I doubt that Spawn's closeness has anything to do with Prowler's absence, especially given that Prowler's most high-profile appearances (his mini-series) came during the height of Spawn's popularity.

I'm pleased to say, however, that since I wrote this entry, Prowler got his day in the sun as a video game character (sadly sans cape) in "Spider-Man: Friend or Foe." He's the first character, other than Spider-Man, that you team up with, which is pretty good for such a relatively unknown character.