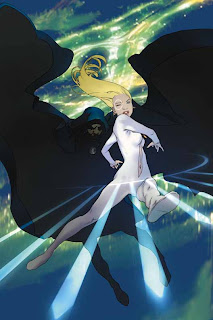 In honor of St. Groundhog's Day, I present a hero that I had planned to wait on. See, this is one of my favorite characters in comics in general, and especially at Marvel, so I wanted to build up to this. But, due to the holiday, it only seemed fitting to talk about a character who has some experience with shadows, which means our second spotlight falls on Tyrone Johnson, also known as Cloak.

Cloak (and his partner Dagger) have a lot of marks against them. Their origin story is one cliché and contrivance stacked up on top of another, in the Mighty Marvel fashion. Ty Johnson fled his poor neighborhood in Boston after his speech impediment accidentally caused his best friend's death (which would give him and Black Bolt something to talk about if not for, well, you know). He ends up in New York City, where he befriends the naïve, wealthy, beautiful blond runaway Tandy Bowen, and the pair was kidnapped and used to test a new kind of synthetic heroin, which triggered their latent mutant genes, and they developed opposite yet symbiotic powers. How conveeeeenient. 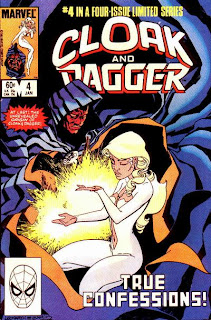 But, despite their origins, Cloak and Dagger have always had a special place in my heart. I'm not sure where I first encountered them, though I suspect it was as guest stars in a Spider-Man comic, but they grabbed hold of my youthful imagination. I mean, sure, they're kind of a package deal, but Cloak's easily the more interesting of the two. After all, Dagger's still pretty normal, and she's far more well-adjusted. She even works well solo. Cloak, on the other hand, is troubled and troubling. He speaks in the sort of Byronic prose you expect from someone like Jason Blood, always talking about the darkness which threatens to consume him and everyone around him. And he isn't kidding; Dagger's still more or less human, but Cloak is a living conduit to the Darkforce Dimension. Most of the time, he lacks a corporeal body, and both the darkness within him and his inner demons are quite literal. It was long before I ever picked up an issue of Sandman that I saw Cloak talking in black word bubbles with white text, and just knew that it meant he had the sort of deep, intimidating voice that would send chills down James Earl Jones's spine.

The same goes for personality. Dagger's pretty cheerful, pretty normal, But Cloak is like a walking mass of passions. He's quick-tempered, protective, and moody to the extreme. And that goes double if you're talking about Dagger. Ty and Tandy's relationship is one of the most unique in all of comics. Cloak needs Dagger, but feels guilty for that; he's very protective of her in an older brother sort of way, but he's also distant and inaccessible, probably because he feels the need to protect her from himself. And they cap it all off with this boiling sexual tension, though they never (to my knowledge) have actually been romantic. And that's part of what sets this relationship apart; Harry and Sally haven't slept together yet. 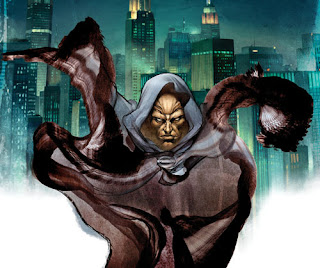 I just finished the second hardcover volume of Runaways and in the Cloak and Dagger episodes, I seem to remember that the two refer to each other in intimate terms of endearment. Things like darling and love. I can't remember in exact detail, but it was something along those lines - and I remember being surprised because I didn't remember there being that more openly, well, romantic aspect to their partnering in the past. I'll have to check that again after I get home.

Well, I have always liked Cloak and Dagger, though as an African American male I did find the whole Black Man – Dark – Beast / White Girl – Light – Angel thing a bit irritating at first.

Once I got used to Marvels dichotomies (or trichotomies) i.e., Death, Eternity & Galactus / Infinity, Oblivion & Galactus? / Lord Order, Master Chaos and the In-Betweener, I began to appreciate the pairing.

You like Cloak and Dagger. I love you now.

Well except for the part that Cloak and Dagger are why my love of comics endured even when I couldn't find superhero comics to read. Because all I had to do was pick up Beauty and the Beast.

Runaways is wonderful. But I decided to buy it the minute I saw them use Cloak and Dagger the way the character should be used. Cause hey - Runaways.

They need a fanlisting or something. It often feels like people go 'Pshaw Cloak and Dagger' without looking at the underlying story.

Also? Runaways won me over again when Molly called Dagger, Cloak's wife. That was just too perfect for a pair of virginal teens committed to each other but too weighed down by all the other issues between them to actually do anything.

Cloak and Dagger call each other 'Beloved'. But they don't do anything else outwardly romantic.