DC Comics has its share of badass characters. Most would put Lobo up pretty high, and Guy Gardner's a natural choice. Of course there's Deadshot, and Hitman, and even Green Arrow. Heck, DC has comics' first badass, the freakin' Batman (no, Namor isn't a badass, Namor's a petulant child). But there's one woman who out-badasses them all: Amanda "The Wall" Waller. 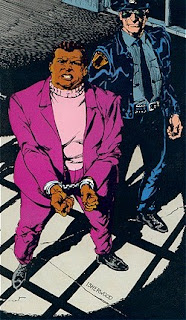 The Wall's full legal name is Amanda @#*!in' Waller. Chuck Norris trembles at the sound of her voice. She gives the Spectre the willies. And despite having no utility belt and no amazing combat prowess, she can stand toe to toe with Batman and not flinch. She's indomitable.

And despite my high opinion of this particular White Queen (much cooler than that scantily-clad bitch Emma Frost), I've not read a whole lot of comics that feature her. I first saw her during the President Luthor storyline, where she didn't do a whole lot, and frankly I didn't know who she was. After that I picked up the Legends miniseries, where she has a minor role, and a few more-or-less random issues of Ostrander's Suicide Squad, of which I need to read more. I'm buying Checkmate now, but she hasn't really had the chance to be the ball-busting bureaucrat that we all know and fear.

No, my real introduction to Amanda (@#*!in') Waller was through Justice League Unlimited, and the amazing vocal abilities of CCH Pounder. Amanda Waller was the shining star of the fourth (second?) season of JLU, walking between good and evil along the razor-thin tightrope of utilitarianism. She was a charming, intimidating foil, who never quite became a villain. It's not often that a series, whether comics or TV, can successfully pull off the depth necessary to carry a "whose side is she really on" character, but JLU made it look easy.

Besides, we all know whose side Amanda Waller is on: her own. And it just so happens that that's also the winning side. And it's no wonder why: she's a short, overweight, normal human woman, but she can surprise the World's Greatest Detective and stand steadfast against invincible demigods. Amanda Waller has nerves of steel, and possibly several other figuratively metallic organs. Her only powers are intimidation and resources, but she manages to rank as high as the Justice League, if not higher, in terms of capabilities. Badass.

I'd say more. I could come up with a list of "Amanda Waller facts" that would show Chuck Norris just what kind of wimp he really is, but I'll just let her awesomeness speak for itself.
That, my friends, is Amanda @#*!in' Waller.

I love Amanda Waller. It's so nice to see a woman portrayed as being a real human being...and smart and intimidating as well. She strikes fear into the hearts of EVERYone!

Thanks to JLU, even my wife knows how awesome the Wall is. What a great character!

wait ... at the beginning of that clip ... is aquaman fighting the WONDER TWINS?

Better. Aquaman is fighting one Wonder Twin, who has shape-changed into an albino underwater tyrannosaurus, while inside of the other Wonder Twin.

God, I love comics. And no TV show has done better comics than JLU.

You've only read a FEW of the Ostrander Suicide Squads? Then you only THINK you know how badass Waller is.

Stand face to face with Batman and not flinch? That's nothing. she's done that with Darkseid!!!

I've never watched JLU, but if you like Amanda Waller, you definitely need to get your hands on the original run of Suicide Squad. I picked up about 2/3rds of it on Ebay a few years ago and it still holds up pretty well.