Cyborg, Flash supporting character: This was probably my first long-term exposure to the character. Left more or less floundering after the end of Titans (or leaving the team, I'm not totally clear on which is correct), Vic was pretty close to having it all. His new Omegadrome body was a mixture of a clone of his original self and a liquid metal alien technological form, which meant he could switch easily between being almost totally human, and being almost totally mechanical, with all the benefits of both worlds. The liquid metal tech granted him amazing versatility and adaptability, and even allowed him to take a form similar to his classic look when in battle (except upgraded from silver to gold). This fact proved tragic when Vic got infected by the Thinker (along with most of Keystone), which deactivated the Omegadrome and brought him back to the old status quo. You had to feel for Vic, to have all that taken away from him yet again. But he soldiered on, helping to found the new Teen Titans and guide a new generation of heroes. 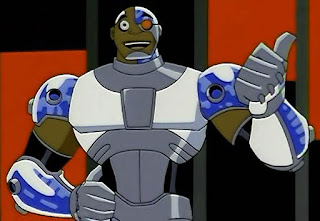 Cyborg, Christopher Turk: The animated Cyborg is far and away the most entertaining character on the show. Most of the time he's got a happy-go-lucky (if overly competitive) attitude, but he's also a loyal friend and a brave warrior. While I haven't seen all of the episodes of the series, it seems to me that Cyborg's the focus of most of the poignant, heartfelt episodes. Whether he's dealing with his own perceived inadequacies and physical limitations, infiltrating H.I.V.E. and befriending some of the members, or falling in love in the distant past, Cyborg is the go-to guy for emotional gravitas. Part of it certainly stems from his tragic beginnings, but part of it comes from the same understanding which fuels most episodes of "Scrubs": there is a balance between comedy and tragedy, and achieving that balance increases the emotional impact of both. No other character on the show, not goofy Beast Boy or brooding Robin or withdrawn Raven or bubbly Starfire, walked the line between comedy and tragedy more often and more effectively than Cyborg. 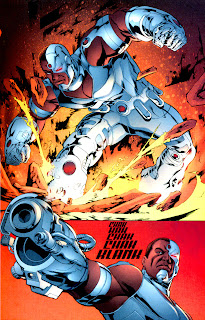 Finally, there's Cyborg the Titan: no longer a teen, Vic Stone has become the mentor to the Titans; even when elder members Starfire and Beast Boy were on the team, Cyborg was clearly the guiding hand, the mentor figure, the veteran. He's not so much a father to the younger members as a coach and a friend, which fits well with his athletic background. He's showing these kids how to be heroes, and moreover, how to be a team. When he was offline, comatose for the One-Year Gap, the team was lost, and still they came to him for guidance. They say that the Martian Manhunter is the heart and soul of the Justice League, but the League can still function and exist without him. The Titans simply don't work without Cyborg there to guide them. When he joined the team, he needed them for the security and support they provided. Now, they need him for the same reasons.

Vic Stone is part man, part machine. Sometimes one part has dominated the other, and he has long feared that he was no longer truly human. Yet he shows time and time again that he is the most human member of the Titans. Perhaps it's a bit cliché, but it never seems to get old.

I guess I had more to say about Cyborg than I thought.

that's awesome. glad to hear he's come so far from his vintage wolfman days as a mopey ben grimm type.

That comparison of Cyborg to Turk from Scrubs actually made me think for a second if Donald Faison did his voice... it fits so perfectly. Sadly, no Titan on that show really fills the JD role... you'd have to mix together parts of Robin and Beast Boy.

But I wonder, if you mined the Scrubs/Teen Titans toon connection, what other gold you could find.