Something a bit different for this post. Even though it's a couple of days late, numerically this falls on Valentine's Day, and so it seemed appropriate to discuss a couple. And no black comics couple has received more attention recently than Storm and Black Panther. This works well for a couple of reasons: I haven't done a Marvel character in a few posts, and while I've been trying to keep things pretty even between the big two, I tend to know more about DC characters, and more DC characters in general. Also, while I like both Storm and Black Panther individually, I don't know enough about either one (at least, from the comics) to do a full single post on each of them. 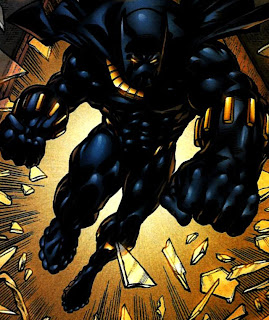 So, we'll begin with Black Panther. I remember the first comic I read with him: Avengers #356 (well, technically he appeared in #327, which I had earlier, but only for a panel). I think the only person I knew in that incarnation of the Avengers was Thor, and maybe Hercules. Everyone else was a cipher to me. At the time, a good portion of the members were wearing brown leather jackets, Thor was bearded while Hercules was clean-shaven, and the Vision was plain off-white. Okay, so I actually prefer the white Vision to the more motely version, but even so, out of that group, it's not hard to see why someone with a costume so simple as the Black Panther's would stand out. Jack Kirby knew what he was doing.

But I never really followed him. I mean, I was intrigued by the mystery of the Coal Tiger, I thought the Black Panther was cool, but I never really followed any of his series. I've read the first five issues or so of Christopher Priest's run, and I enjoyed it, but that's about the extent of my exposure to Black Panther. That, and going out of my way to unlock him in Marvel: Ultimate Alliance, only to be sorely disappointed in how such a badass character could be so easily and consistently killed by cronies. But I like Black Panther; I like BP in the same way I like Aquaman: the idea of a superhero who is also the leader of his own nation is really, really intriguing, but the actual comics about it just don't quite hook me. I'm going to continue reading the Priest stuff, and hopefully I will eventually feel that hook (suck it in suck it in suck it in if you're Rin Tin Tin or Anne Boleyn), but it just seems like the narrator character and the funky chronology of the book is keeping me from connecting. 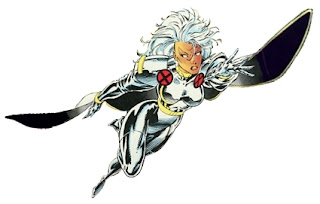 I'd like to say that I'm more familiar with Storm, and when I started this post, I thought I was. But despite following various incarnations of the X-Men in various eras, it seems I always manage to pick it up when she's not on the team, or in the book that I'm reading. On the plus side, this means I missed out on the whole leather-and-mohawk phase, but on the minus side, it means I've missed out on the comic book Storm. I know she led the "Uncanny" team while I was reading the adjectiveless book (I have an issue with the Shadow King to prove it). I feel immensely sorry for Ororo that she was laboring under Chris Claremont in the horrendously-named X-Treme X-Men while the rest of her team was experiencing the Morrison renaissance. And so far, despite the name of one of her Marvel: UA costumes, she hasn't shown up in Astonishing X-Men yet.
But I like Storm. I think she suffers a bit from the Of Course She Is syndrome, what with being a street thief and a princess and worshipped as a goddess and a Mutant and the child of sorcerers and from a special African tribe and a good fighter, oh but she's flawed because of her claustrophobia. Of course she is. But Storm has the regal attitude to back it up, and they usually gloss over her days as a street urchin.

Most of my knowledge of Storm, I realize, comes out of the old animated series (because if it came out of the movies, I'd conclude that Storm was a stiff actress who has a habit of chewing scenery). There, Storm was regal without being unapproachable or naïve, and powerful without being unsympathetic. One of my favorite elements from that series was her romance with Wolverine, not because it necessarily fit the characters, but because it developed so naturally and so gradually, and by the time it became explicit, it just felt right.

And in my estimation, that's really the key to a good fictional relationship. It has to feel natural. Take, for instance, John Stewart and Shayera Hol in the Justice League cartoon. The relationship between the two built up slowly, the tension increased, the attention paid to their friendship increased, until it seemed inevitable. Batman and Wonder Woman had a similar thing in the same series (though it never quite became explicit), and in the Joe Kelly run on JLA (where it did, but didn't become serious). I think when it comes down to it, there are a few factors which increase the length necessary for a relationship to feel natural:And it's this, rather than (as Mr. Hudlin suggested) the fact that it was a black couple, that caused much of the uproar with Black Panther and Storm. Here, we have an A-list heroine and a high-B-list to low-A-list hero hooking up, seemingly very suddenly, and rushing headlong into marriage. I know they retconned a relationship into Storm's history, but retcons rarely if ever help anything feel natural.

But I haven't read much at all of their relationship, except during the big deference kerfuffle from a few months back. And since it doesn't look like this will be retconned into a ploy orchestrated by Starfox anytime soon, I wish the best of luck to Marvel's most regal couple. 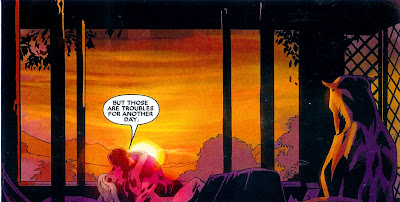 I especially like your suggestions about how to make a relationship seem more reasonable. I haven't followed either Storm or the Black Panther lately, so the marriage seemed very thrown together to me.

This can backfire on writers, though. Like how "everyone" was expecting Batman to be the father of Catwoman's baby because they have a history together. When Pfeifer threw them a curve ball, the fans were outraged. (Not all of us, but you get my point.) No matter how much the explanation makes sense, it still seems thrown together in comparison to the relationship with a lot of history backing it.

Well, I for one am glad they put two black characters together, inter etnic dating is o.k., but I do like finally seeing a black couple. Heck, Luke Cage, John Stewart, Cloak, etc., etc. all with white ladies.

Second, they retconed Black Adam knowing Nabu in JSA because it made sense. Two African characters knowing each other, especially if one is the King of an African country, makes sense to me.

I agree with you on all your points; I too always liked Black Panther but never actively followed the comic. I was, however, a big fan of Storm due to the animated TV series, (I also liked the 'naturalness' of the Wolverine/Storm relationship in it!) ...which bade me to seek out Uncanny which I read religiously for a couple of years.

I no longer read X-men, so this was news to me, and I was slightly suprised. To me, it's not the ethnicity of the characters, but the way they seem pushed together. I call it 'deus ex' writing-- especially the retconning of relationships as a means to quickly justify a planned outcome by the writers.

You're right, the best relationships always develop slowly, naturally, almost teasingly. Also, romance is one thing, but marraige? I wonder about the motivations of the writers. Why BP? Even though it makes sense because they are both African leaders and might have met, is that also the reason why they did put them together? I'd be less skeptical if it had been alluded to in the past issues, not just in a newly written flashback.

I always thought she'd get back together with Forge sometime. Ah well.