I'm torn by The Power Company. I remember when the series came out that I thought it was this blatant publicity stunt, with the old '90s tactic of releasing a bunch of guest-star-studded one-shots to drum up support for a new book (Slingers and Team Titans, anyone?), and more or less refused to buy it (I seem to recall that there was some financial reasoning there too). Somehow, I neglected to notice that, in addition to featuring one of my favorite artists (Tom Grummett), the book also boasted the amazing writing talents of Kurt Busiek. I guess at the time I hadn't read Marvels or Astro City, so that's a bit forgivable, but today I'd snap that up quick.

And, in fact, I have snapped that up quick, and this is where the tearing comes in. I mean, as nice as it would have been to support such a fantastic and original series, as nice as it might have been to be the one reader who breaks the camel's back and forces DC not to cancel, it's also nice to pick up all but, like, four issues of a series for $.50 a piece (and not more than $2.00 for any single issue).

But that's neither here nor there. The point is, Power Company was a great series with a great premise, and one of these days I need to actually read the last six issues or so. And the shining star of the series was the team's leader, Skyrocket.

Lt. Celia Forrestal is a little like someone took Carol Ferris, Hal Jordan, and Iron Man, and stirred them into a big pot. Her Naval career was hampered by her gender and race (and certainly not her top-notch piloting skills), and when her parents were killed by the evil Scorpio organization, she took their experimental cybernetic Argo Harness and became a crimefighter.

Unfortunately, being a superhero doesn't exactly pay the bills, and seven years into her Skyrocket career, Celia's wallet was really feeling the pinch. Then, Josiah Power approached her to join his heroes-for-hire firm. She took the gig somewhat reluctantly, but unable to refuse an opportunity to both help people and keep herself fed.

So Skyrocket became the de facto field leader of Power Company. Of the members, she was the only one with the actual desire to be a superhero, and the experience to back it up. 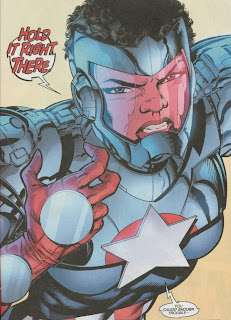 Sure, the other members had reasons for helping people and being on the team, but they were musicians and stunt doubles and assassins first, superheroes second. Skyrocket was the team's conscience, their strong moral guidance.

Of course, she was also human, and humans tend to be imperfect. Skyrocket wasn't simply Jiminy Cricket, she was a normal person who somehow had to unite five other people with wildly different goals, attitudes, and personalities, into a cohesive force with a coherent moral vision. When Josiah Power was comatose, she had to take control of the whole organization, and all the pressures that came with it. She didn't particularly want the job, she didn't particularly like a lot of her teammates or their carefree attitudes, but she stuck with it, earned their respect, and made them effective.

In other words, Skyrocket was a leader, and a damn good one too. 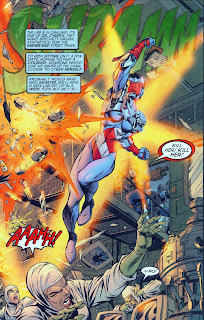 Yay! One of my favorite characters from DC

I'm a big Busiek fan, but I haven't read Power Company at all. I should do that.