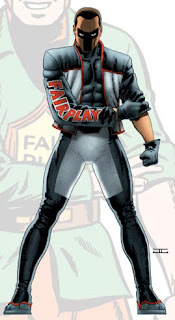 What can I say about Mr. Terrific?

I've listed pretty much all of the characters I'll be talking about this month on a sheet of paper. Like I said on the first day, I've picked ones who, for one reason or another, I really like and connect with. Even so, a few stick out as favorites. There's a reason I started with Ron Troupe, after all, and I've always loved Cloak. But when I look at this list, there are just a few who stand out as my favorites. Mr. Terrific is absolutely one of them (as for the others, besides Ron, I think you know who they are, and they'll be coming up a little closer to the end).

I honestly don't know where to begin. Should I mention that I love Mr. Terrific's costume? Because I do. I never really cared for Terry Sloane's outfit (though I also never read many comics featuring Terry). I mean, not many people can pull off a red, green, and yellow color scheme--unless they happen to be from New Genesis. But Michael Holt's another story altogether. It's modern, it's fairly simple, it's a nice bridge between the old '90s leather jacket, non-costume costumes, and the traditional tights. The T-mask looks good and works well (and has been used very effectively by various artists), and the T-Spheres add an element of motion to the character even when he's not moving. Very nice.

Mr. Terrific's got great powers. I mean, he's a normal person on one hand, but on the other he's the peak of human athletic ability and the third smartest man in the world (and I'd say that's an arguable distinction). For some people, those powers would be unbelievable, but Michael pulls it off with aplomb. He's a genius, but he's not arrogant, he's not condescending, he's not dour and dreary...basically, he's not a jerk about it. In fact, quite the opposite; I'm reminded of that scene at the beginning of Obsidian Age where Hawkgirl and Captain Marvel are tapped by Batman's emergency system to join the new JLA, and rather than being upset at not being picked, Mr. Terrific's flattered that Batman copied his T-Sphere design. He's a nice guy, and one without any serious emotional or mental problems, to boot. In a medium where most genius scientists suffer from insecurity, inattentiveness and absentmindedness, anger issues, paranoia and mental breakdowns, low self-esteem, god complexes, vanity, chemical dependence, and a host of other neuroses, it's nice to have one or two who are well-adjusted and emotionally stable.
Of course, no mention of Mr. Terrific's abilities would be complete without discussing the T-spheres, and his technological invisibility. The T-Spheres are versatile little devices which can project holograms, create laser grids, act as cameras, allow Michael to fly a la Mr. Miracle, and basically do whatever else the plot demands. And the 'invisible to all technology' ability has been used a bit inconsistently (less so if we assume that he can turn it on and off at will), but to good effect in Infinite Crisis and the tie-ins. The full extent and application of this power has yet to be realized, but in my estimation there's at least one locked-room murder mystery and one team-up with the Doom Patrol or Metal Men to be had. 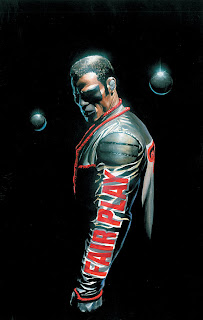 For those who may not know, Michael took on the Mr. Terrific identity after his wife (and as he found out later, unborn child) were killed in a tragic car crash. For a long time, Michael remained single, with the apparent (though to my knowledge, unstated) reason of being faithful to Paula. While that was touching, it's also good to see him moving on (further demonstrating his emotional stability), as evidenced by his romance with Sasha Bordeaux. Sure, it's inevitably going to cause major problems, given their opposite positions within Checkmate, but it still seems like a healthy relationship.

And speaking of Checkmate, how often do you find a character with a leadership role in two major groups? And he's not a bad leader, either, but an effective, well-liked leader. It's another situation where he could have easily been turned into the modern Brainiac 5--a closed-off, obnoxious genius who is so far above everyone else that he rarely deigns to consider them--but instead he's very human and very down-to-earth.

As you probably know, Mr. Terrific is one of comics most outspoken and well-known atheists. As far as underrepresented minorities in comics go, "out" atheists are pretty close to the bottom. And there are more than a few writers, methinks, who don't quite know how to handle this. I can think of at least two stories where his position is treated as a flaw to be corrected, where he has "found religion" for one reason or another. Heck, in Infinite Crisis Ragman more or less called him stupid for not seeing the existence of God. In a world where magic can be shown empirically to exist, where the Spectre has served on the JSA, where angels and demons routinely battle in the cities, where you can commune with the Greek or Roman pantheons if you so desire, some would say that it's hard to maintain a position of disbelief. Yet, Michael always returns to his rational skepticism, much to the joy of the nontheistic readers.
And despite sometimes having writers who don't quite understand what to do with a godless superhero, Mr. Terrific never falls into the 'angry atheist,' 'dour disbeliever,' or 'condescending contrarian' stereotypes and strawmen. As representation goes, atheists could hardly ask for a better model (more models, certainly, but not better).

Mr. Terrific is a confluence of minorities; he is a black atheist scientist non-powered superhero government agent, who nonetheless manages to be a three-dimensional, well-rounded character in every aspect. He never falls prey to the societal stereotypes or the comic book clichés that surround him. I'd say that such fair representation is miraculous, but somehow I don't think that's the right word. 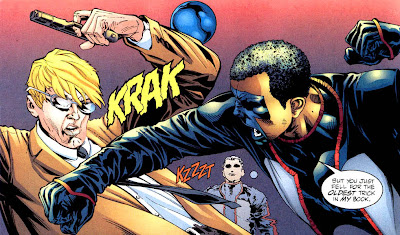 I don't know. He lives in a world where the exsistence of "God" seems actually provable. That just makes the idea of being an athiest a better harder to swallow...

I mean Dr. 13 I guess can pull it off, but don't they do that by making him kind of crazy?

Being an agnostic or adeist I could see. But when you've actually MET angels and demons and whatnot I just have a harder time understanding your disbelief. I mean its not even a lack of faith kind of thing. Because for the DC 'verse, the divine IS verifiable...

He's still a cool character though...

I'll be tackling this subject in the first week of March: "Disbelief in a Demon-Haunted World." It's not as tough as you'd think.

Sounds like you may be thinking along the same lines as I am, Tom. Just because you've met lots of folks who *claim* to be gods and angels, it doesn't mean they're divine or worthy of "worship." And the fact that most of them can be socked in the jaw by Superman doesn't help their case much.

Ted Knight was definately either an agnostic or athiest. Which is part of why encounters with the Prarie Witch and Etrigan really screwed with what he believed in...

Love the character. Love the costume. Hate the mask. It's glued to his lips, for cryin' out loud!!!

It's nanotech, so it's basically a second skin. It doesn't seem to be an actual material.

David C: Yeah, that's about the direction I'm going in, but if I give away all my secrets, who'll read the post?

Mr. Terrific is absolutely fantastic. I find him one of the most likeable heroes since Spider-Man.